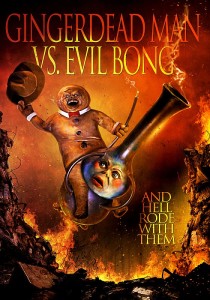 If you are a fan of Full Moon Features, then you are probably just as excited as I was for this crossover horror/comedy film. “Gingerdead Man vs. Evil Bong” brings together two of Full Moon’s successful characters into one crazy-ass film. I have to admit, I was really expecting a little more from this crossover. The main problem I had with it was that it spent a good portion of time rehashing each of the battling characters’ prior films in a flashback sequences. So it felt like a bit of a cop out and just burning through time. I am still a fan of both franchises, so it was fun to see them come together. If you enjoy Full Moon films, then this is worth checking out though I am sure that this would work much better under the influence of the “evil” bong.

Official Premise: It’s a War of the Colossal Freaks when serial killing cookie, Gingerdead Man, tracks down the lone survivor of his murderous rampage, Sarah Leigh (Robin Sydney), to take care of unfinished business. But his devious plans go up in smoke when Sarah meets Larnell (John Patrick Jordan), who has a pint-sized problem of his own. The 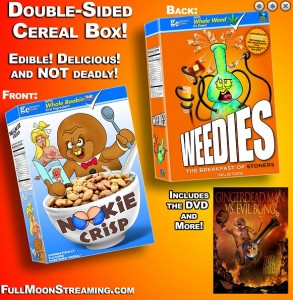 Evil Bong, Eebee, has been unleashed once again. Bodies begin to pile up as Gingerdead Man carves a path for them. Their only salvation is to turn to help from the dastardly Bong. It’s one tough cookie versus one bad trip mother when the two Titans of Terror hash out a war in the Bong World. The stakes have never been higher.

The presentation of the release is much worth mentioning. It comes in a very cool “Nookie Crisp”/”Weedies” Double-Sided Cereal Box and yes, there is actually an 11.5 oz bag of cookie cereal included!  I had a bit of a hard time opening the box as it was super glue sealed shut. So I had to do a bit of surgery to open the bottom of the box, so that was a little annoying. Still it is a great display piece and is down right funny as well. There is also a a surprise collector’s item gift in every box. I got a “Evil Bong” magnet, which features the poster art from the first film. There is also some special features included as well for the film including some trailers and a VideoZone episode.