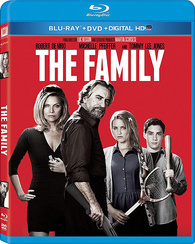 When it comes to action films, Luc Besson is a name that I trust. He delivered some great genre films over the years.  “The Family” is a different type of film for Besson because it is a mix of comedy/crime, there is some a nice mix of action in it though. The film does pack a solid cast including Robert De Niro, Michelle Pfeiffer and Tommy Lee Jones. There are a few clever parts in here and Pfeiffer is as beautiful as ever but overall, I wasn’t blown away. Worth taking a look for the cast but this is quite forgettable.

Official Premise: A Mafia boss and his family are relocated to a sleepy town in France under the Witness Protection Program after snitching on the mob. Despite Agent Stansfield’s (Jones) best efforts to keep them in line, Fred Blake (Robert De Niro), his wife Maggie (Michelle Pfeiffer), and their children Belle (Dianna Agron) and Warren (John D’Leo), can’t help resorting to old habits by handling their problems the ‘family’ way. Chaos ensues as their former Mafia cronies try to track them down, and scores are settled in the unlikeliest of settings.

As always Fox delivered an impressive release delivering this releases as a combo pack including Blu-ray, DVD and Digital HD digital copy. What Luc Besson knows well is how to make a film look good. For the film’s action, the 1080p transfer works well. It showcases the filming locations well, as it does with the action and the same goes for the DTS-HD Master Audio 5.1 track, which is very sharp. In terms of special features, we go right back to be being disappointed. There is a short behind-the-scenes looks with “Making The Family”. The only other extra is “The Many Meanings of FU*%!”, which is sort but still fun.