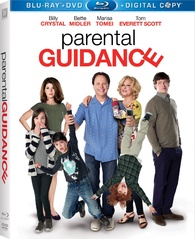 When “Parental Guidance” was released in theaters, I had zero interest in seeing it. I thought that it would come and go from theaters without making any splash. But surprise, surprise the film was a real success and captured by interest.  “Parental Guidance” reals packs a sharp cast. Billy Crystal, Bette Midler and Marisa Tomei really deliver some very funny and heart-felt performances. Andy Fickman has the family comedy down after 2010’s “You Again”. Maybe it is because I just had a child last year but the idea of the grandparents babysitting has a whole new meaning for me…and very funny. There is tons of fun to have with this film and I would recommend it for the whole family.

Official Premise: Billy Crystal, Bette Midler and Marisa Tomei prove that laughter is relative in this hilarious comedy that’s fun for the whole family! Old-school grandparents Artie (Crystal) and Diane (Midler) get more than they bargained for when they get stuck babysitting their type-A daughter’s (Tomei) overprotected kids. But things go from hectic to hysterical when Artie realizes the kids are running the house with their newfangled technology. By playing by his own rules, which include sugary snacks, old fashioned games and tough love, Artie manages to outsmart the kids and achieve the impossible- bring the family closer together!

Fox has delivered a very impressive release. It comes as a combo pack with a Blu-ray + DVD + Ultraviolet Digital Copy.  The 1080p video transfer works well with the comedy and looks sharp.  The DTS-HD Master Audio 5.1 surround track works with the comedy and jokes. The dialogue is clear and sounds great. The special features are not bad at all for this release.  There is an Audio Commentary track with Director Andy Fickman and Billy Crystal.  It is informative and funny.  There is a Blu-ray exclusive extra presented from FXM Productions called “In Character with Billy Crystal, Bette Midler, Marisa Tomei”, which has the talent talking about their roles. Lastly there is a few decent Deleted Scenes with Optional Commentary by Director Andy Fickman, as well as a very funny Gag Reel.