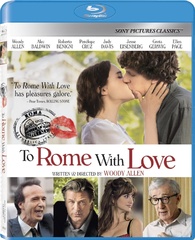 After “Midnight in Paris”, which was a favorite film of 2011, I was wondering how Woody Allen can top himself. Well I guess I set myself up for disappointment, and everyone seems to feel the same way. There was a certain bit of charm and magic that he is missing in “To Rome with Love”. It is not all bad though, especially with the film’s all-star cast including Alec Baldwin, Roberto Benigni, Penelope Cruz, Judy Davis, Jesse Eisenberg, Greta Gerwig, Ellen Page and the man himself Woody Allen. It is really a fabulous cast and everyone delivers a really swell performance. The story is very sweet and romantic but like I said it just a felt a little off. It was nice though to see Roberto Benigni back in the rat race. Overall if you are a fan of Woody Allen, I wouldn’t miss it just try and put “Midnight in Paris” out of your head.

Official Premise: The story is told in four independent vignettes about four characters whose adventures change their lives forever: an average Roman wakes up one day to find himself a well-known celebrity; an American architect revisits the streets on which he used to live as a student; a young couple on their honeymoon are pulled into separate romantic encounters; and an American opera director tries to turn a singing mortician into a star.

There is something amazing about the way that Woody Allen writes his films. His dialogue is so extremely clever and fast moving. It always makes you think and never ceases to entertains. I am dying to see what he has cooked up for “Blue Jasmine” next year starring Alec Baldwin, Cate Blanchett, Bobby Cannavale, Louis C.K., Andrew Dice Clay, Sally Hawkins, Peter Sarsgaard and Michael Stuhlbar. The Blu-ray looks great with its 1080p transfer and it’s depiction of Rome. The DTS-HD Master Audio 5.1 track works great with the dialogue and the fantastic score. The special features are almost virtually missing. There is one behind-the-scenes featurette called “Con Amore: A Passion for Rome” which looks into the production with cast and crew interviews with Alec Baldwin, Penélope Cruz and Greta Gerwig.