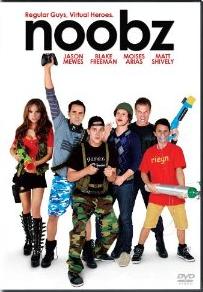 I wasn’t sure what to expect with “Noobz” but Hollywood shit where did this film come from? This movie is a riot and what a fantastic cast! It is great to see Jason Mewes getting a leading role. Casper Van Dien is a complete riot playing a hysterical version of himself, I wish he was in this more. Lin Shaye has a nice cameo and get some good laughs. I was not familiar with Blake Freeman, who also directed, but this guy is riot and I am sure we will be seeing a lot from him in the future. Matt Shively is also very funny, you may know him from “Paranormal Activity 4”. Moises Arias from “Hannah Montana” is all grown up and is awesome as well. Lastly, if you thought Jon Gries was funny in “Napoleon Dynamite”, he is 10x funnier in this film. If you are a gamer, especially “Gears of War”, then this is definitely for you. Jam-packed of funny gaming references that will have you rolling.

Official Synopsis: Noobz is the first big, outrageous comedy to capture gamer culture from the inside. Four friends hit the road to LA to compete in the Cyberbowl Video Game Championship but will they be able to compete with the worst hangovers of their lives?   Cody has just lost his job and his hot wife is leaving him because he can’t stop gaming. Game store clerk Andy (Jason Mewes, Jay and Silent Bob Strike Back) convinces him to get the Reign Clan together, including sexually confused Oliver (Matt Shively, Paranormal Activity 4) and asthmatic teen “Hollywood” (Moises Arias, Ender’s Game, TV’s “Hannah Montana”), and head to California to win prize money and meet Andy’s online gamer-girl crush Rickie (Zelda Williams, daughter of Robin Williams). Nothing, not a Mom armed with mace or a bunch of bodacious strippers or a mulleted arcade game champion stuck in the ‘80s (Jon Gries, Napoleon Dynamite) or even Casper Van Dien (Starship Troopers) will stop this unlikely team from getting their frag on and bringing their A-game to the stiff competition.

The special features on the DVD are quite decent. There is a super funny audio commentary track with Blake Freeman and Jason Mewes, must listen. “One on one with Jason Mewes” is an in-your-face feature with the funny man himself. “Meet Director Blake Freeman” introduces us to this funny guy, who directed and starred in this film. “A chat with Casper Van Dien” shows you a new side of this guy and he is one funny son bitch. Lastly “Fun with Matt Shively” is very funny and a little weird…but still a riot. Overall, I am surprised that this little film has received such a nice DVD release. Overall, I recommend this little film for sure…gamer nerds spread the word!