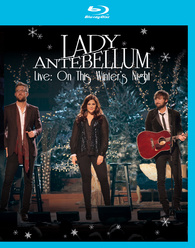 I think that there is nothing that Lady Antebellum cannot do. Their music is quite amazing and crosses from beyond just country music fans. Last year when the band released “On This Winter’s Night”, it was easily my favorite Christmas album of the year and was on loop for endless plays on my phone. I was thrilled to find out that Eagle Rock is releasing a filmed concert of the band performing these songs at Nashville’s famed Schermerhorn Symphony Center along with more than 40 symphony orchestra musicians. This Blu-ray is a great way to get into the Christmas mood. I have a feeling that we are going to wearing this Blu-ray out this holiday season.

Official Premise: In between dates on their massively successful world tour, country superstars Lady Antebellum spent their brief summer break recording Christmas songs for their festive album On This Winter’s Night . This live concert film brings those songs to life with the help of more than 40 symphony orchestra musicians at Nashville’s famed Schermerhorn Symphony Center. The program includes seasonal favorites like ‘Have Yourself A Merry Little Christmas’ and ‘Let It Snow, Let It Snow, Let It Snow’, alongside the self-penned title track ‘On This Winter’s Night’. The collection includes 11 live performances along with personal Christmas stories, memories, and traditions that Lady Antebellum are sharing with their fans for the first time.