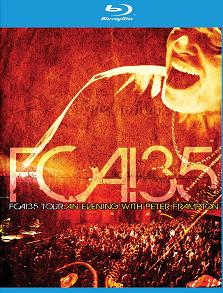 I remember the first time that my father introduced me to Frampton’s “Do You Feel Like We Do” in the early 90’s.  Since then I have been a fan of not only the song but all of this work. Frampton celebrated the 35th anniversary of his multi-platinum selling live album Frampton Comes Alive in 2011 and kicked off a world tour.  This Blu-ray contains footage from shows at New York City’s Beacon Theater and Milwaukee’s Pabst Theater. It is split into two parts.  The first is “Frampton Comes Alive!” performed in its entirety, while the second part focuses on tracks from recent albums such as “Fingerprints”, “Now” and “Thank You Mr Churchill”.  If you have never seen Grammy winning guitarist Peter Frampton live, I highly recommend it. He is one of rock’s most iconic guitarists and gives on hell of a live performances.  This concert captures that quite well.  A must for all fans!

Eagle Rock is behind this impressive release. “FCA! 35 Tour: An Evening with Peter Frampton” has been put up with a super nice 1080p (yes, 1080p) transfer, which is rare for Eagle Rock, and presented in 1.78:1 aspect ratio. There are two audio tracks included, obviously the first is my favorite.  There is a lossless DTS-HD Master Audio 5.1 surround track, as well as an uncompressed LPCM 2.0 stereo. I am a big fan of Frampton’s classics like “Show Me The Way” and “Do You Feel Like We Do” and they sound simply awesome on this release.  There are no other special features includes in this release. I should note that the release doesn’t come in a standard Blu-ray casing.  It is hard-stock paper fold book like case.  It is very thin and surely space efficient.