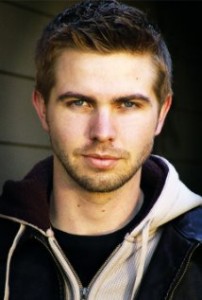 It worked for Sylvester Stallone. It worked for Matt Damon and Ben Affleck. And, if things go well, it’s going to work for Matt Thompson. An actor who does so much more, Thompson found himself in a quandary. You can’t get noticed in Hollywood unless you’re in something but unless you’re in something you can’t get noticed. So he took it upon himself to write and direct the new film, “Bloodline,” which opens today (9/27). He then cast himself in the lead. Take that, Hollywood! While taking time off from his next project Thompson took time out to talk with Media Mikes about his current one.

Mike Smith: Can you give us a quick introduction to “Bloodline?:
Matt Thompson: “Bloodline” is about a seminary student named Brett Ethos, who I play. He falls away from the church only to find out that his bloodline has been cursed, ironically, a couple of hundred years earlier.

MS: What inspired you to write the script?
MT: It was about 10 years ago when I was just starting out. I had talked to a producer and had told him how frustrating it was sometimes. How you have to have something to be in something yet you have to be in something to have something in this industry. It’s truly a Catch 22. I was taking an acting class at the time. He told me that I should write myself into something so I did exactly that. I looked at the horror/thriller genre’ and found it to be incredibly fascinating. It’s one of my favorite genres…it can grip you like no other can. Being from Northern California I had a great interest in Native American legends…I mean you can literally walk out into your back yard and find a grinding stone. It was really a natural fit, to piece together the Native Americans and the settlers and piece together the “Bloodline” idea…to tie in with the Native American legends.

MS: Did you write the film with the intention of both appearing in it and directing as well?
MT: Exactly! You have to have something to be in something. The whole idea was to basically create a vehicle that I could put myself in. In the interim I had written a short film called “Fallen Soldier,” which I also directed. When it was completed friends would encourage me to direct and explore that side of my creativity more. 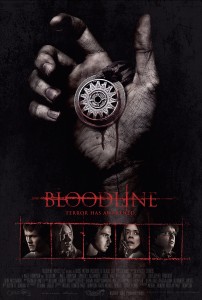 MS: Is it hard wearing two hats on the set? To concentrate on your performance as an actor while concentrating on everything else as a director?
MT: Oh my God, it’s an incredible task! You kind of have to be schizophrenic in a sense, jumping in and out of, a., being an actor and, b., being a director. In one frame you have to be completely emotionally invested with your co-stars while in another you’re out of the shot and worrying if the lighting is right…if the camera is in the right place. Are the actors delivering? And on top of all that you have to deal with all of these people. You’re not only their co-star and friend but you’re also their boss. There are a hundred different facets in acting and directing at the same time.

MS: You recently completed a run on stage as Stanley Kowalski in “A Streetcar Named Desire,” a role considered one of the most iconic ever on the American stage. Is there pressure as an actor to take on a role that well known and so well associated with another actor? And do you take a look at the way other actors have done the role in previous performances?
MT: I knew how big the role was but I didn’t watch the movie. In fact, I didn’t watch the movie until I finished my last performance because I wanted to give Stanley my own spin. He was much more devious…more of a maniacal character. I actually prefer that version at the end of the day, more so then the movie. I mean, of course, hats off. In the movie Brando gives one of the best performances on film of all time, in my opinion. And I did the part because I really wanted to put myself out of my comfort zone and do something that was just really, really hard before going into production on “Bloodline.” I have so much respect for stage actors. Once you’re in that role…in that character….you’re there for two straight hours. There are no cuts…no one is laughing with you at the outtakes. You’re invested. And that’s the kind of discipline I wanted to have when I went after that role.

MS: Great answer. I played Moss in “Glengarry Glen Ross” several years ago..
MT: Nice!
MS:..and I purposely didn’t watch the film until the run was over. And when I watched it there was so much stuff I wish I had done…I could have stole that bit, I could have done that…but then I realized that if I had I would have just been doing an imitation of Ed Harris instead of making the role my own.
MT: (laughs) Exactly!

MS: What are you currently working on?

MT: I’m working on a few things. I have a couple of pilots right now that I’m getting ready to shoot. The biggest project I’m working on now is a crime drama that fits in the realm of “Blow,” “The Departed,” “The Town” and some other movies. It’s about a sheriff’s deputy that goes undercover in a multi-million dollar drug ring, becoming the right hand man to the guy that’s importing all of the cocaine from South America to California. He basically starts out as the shiny penny hero and becomes corrupt in the process. There’s instance after instance and decision after decision where you think “I’ll follow this guy all the way to the dark side.” I’m a big “Breaking Bad” fan and the film is akin to it, I think.

MS: Is this something you would also direct or do you just plan to appear in it?
MT: Right now I’m just concentrating on getting it green lit. I’m not opposed to having someone else direct it as long as they have great credits and a really great vision for the film. This is a project where I’d really like to concentrate on the acting portion so I probably won’t end up directing it. But there’s always the chance.