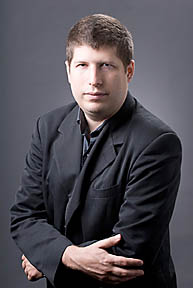 Imagine an indie horror movie with a big Bollywood ending.  I thought I’d seen it all until I watched, Supernaturalz: Weird, Creepy & Random on Amazon Streaming, a web hit. The movie goes where few movies have gone before. It is no surprise, then, that it comes from the mind of a former Troma Studios alumni, director Kevin Sean Michaels, who worked with Troma President Lloyd Kaufman on Poultrygeist: Night of the Chicken Dead.  He also directed two documentaries, Vampira: The Movie and The Wild World of Ted V. Mikels, which in fact was narrated by none other than John Waters himself. I caught up with the director to ask him why he made Supernaturalz: Weird, Creepy & Random.

Mike Gencarelli: What inspired Supernaturalz: Weird, Creepy & Random? Seems pretty bizarre!
Kevin Sean Michaels: It is! I grew up watching a lot of sitcoms, where for no reason there would be a serious episode.  Then back to comedy. The worst was Family Ties, where Alex Keaton (Michael J. Fox) actually lost his virginity at 17 and has to talk to his Dad about it.  Anyway, I thought it would be entertaining to mix horror and comedy like that.  But we decided not to put a laugh track.  As a result, no one is cued to laugh, they just do.

MG: What has been the reception?
KSM: Very intense because the movie plays like a practical joke, similar to the movie, “The Room” by Tommy Wiseau.  It’s like—how can this be a real movie? Are they serious? But the movie is like one of Ed Wood’s—it reads like a stage play gone wrong, but in this case the train-wreck is part of its charm. And totally planned out.  People seem to really connect with it on its level. And on its terms.

MG: I know you directed “Vampira: The Movie”.  Are you a fan of Ed Wood?
KSM: Of course! When I did Vampira: The Movie I was able to talk to some of the original actors like Conrad Brooks. He said Ed really put heart and soul into his films and that they were supposed to be funny.  Like the imperfections was the perfection. That’s why I look up to Ed Wood, too.  I read recently that Bobcat Goldthwait got a tattoo from Kat Von D, stating just that—Ed Wood was inspiration to filmmaking independence. 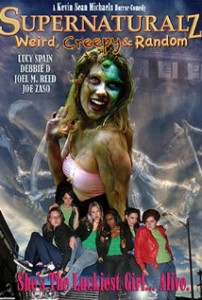 MG: What was the inspiration for the characters in Supernaturalz: Weird, Creepy & Random?
KSM: The Garter Snakes gang was funny.  I love the idea of a gang of girls, like in the biker movies.  Basically, for them to act like old Bowery Boys, Three Stooges with a dash of Happy Days.  There is love in the group, even if they all insult each other.  If Fonzie tells Potsie to “sit on it” he doesn’t mean “fuck you. “  And when the characters start dying in Supernaturalz: Weird, Creepy & Random, it comes down to how the gang reacts.  But it is goofy cartoon fun in the end.

MG: Some pretty harsh things happen to the gang…
KSM: (laughs) That’s the point.  It’s got an unreality to it.  It’s like the Nightmare on Elm Street movies.  Freddy can laugh at all of it and the audience is with him somehow.  Our villain is also our main character.  She goes through changes, but it’s the force of evil that is the real villain.  I’ve seen a few audience members jump out of their seats at some parts of the movie.

MG: Any advice for filmmakers doing their own special effects on a budget?
KSM: Yes, never put soap in your mixture for fake blood.  People slip on it.  That’s why I have never done it.

MG: What about the nudity in Supernaturalz: Weird, Creepy & Random? Especially the snake scene…
KSM: Yes, the snake scene is a stand-out.  I was always amazed by reading about the stir caused by the snake scene in The Devil in Miss Jones.  They cut the scene out so many times that it’s now legend.  Our scene is a homage to that.  The other thing is to play with nudity where it’s sexy but yet scary or weird at the same time.

MG: And the Paris Hilton scene?
KSM: Well, it’s not really Paris Hilton (laughs).  I like the idea that someone would be cruel enough to steal someone’s clothes as well as their car just to humiliate them, but also to follow their sexual fantasy.  In this case, Patti’s fantasy.  To strip the rich is sexy.  Our gang member Patti is a shoplifter and can’t seem to stop herself from going too far.  So our 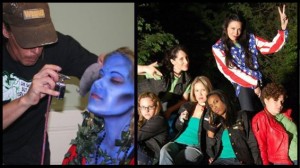 Paris Hilton-character is stranded like in Castaway, talking to her fuzzy handbag instead of a little dog.  People seem to really like the scene.

MG: Why the strong emphasis on Indian mythology and Bollywood dancers?
KSM: Something I haven’t seen in a movie like this and people don’t expect it. It really challenged us, too.  It’s very panoramic on the screen.  Indian mythology is very interesting and there is so much to it.   Even our character, The Mighty Sardar, isn’t mighty enough to handle it all.  He has to rely on his assistant.  The phallic symbols are a part of Hindu temples, so we have that as well. When you see the movie, we really made it twisted, so I hope there is no bad mojo because of it (laughs).

MG: Is horror and comedy a trend?
KSM: It’s always been there.  Comedy is always part of horror.  You can’t have dark without light.  I’d rather be in the light.

Check it out on Amazon Streaming or DVD: http://tinyurl.com/mtwsagv