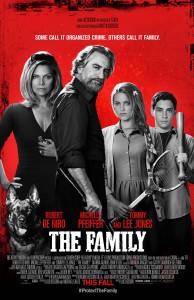 Seemingly always on the move, the Blake Family arrives at their new home in Normandy, France. Excited about the next day, young Warren asks about his new school. He has another question: “Do we have the same names?”

Sometimes hilarious, “The Family” tells the story of the former Manzoni family. Father Giovani (DeNiro), now known as Fred, is a former mafia crime boss who ratted on his associates and now finds himself in the witness protection program. Unfortunately Fred has made some very powerful people angry and the family is constantly being moved for their protection. Mother Maggie (Pfeiffer) is the calm one, doing her best to keep the family strong and urging them to be low key. Of course, this doesn’t prevent her from blowing up a local grocery store when she feels insulted. The kids, Warren (John D’Leo) and his older sister, Belle (“Glee’s” Diana Agron) do their best to adjust to their new school and classmates, though not without some bumps. The Blakes’ FBI handler (Jones) decides that the best way to get the family acquainted with the neighborhood is to throw a giant barbecue. But even a good cook-out can have its problems.

Well cast and sharply directed by Besson, who also co-wrote the script, “The Family” flows easily for the first half. Unfortunately though, once the Blake’s whereabouts are discovered by the bosses back home, the film turns into a very serious and violent drama. Now instead of laughing along with the family’s antics you’re hoping they don’t catch a bullet in the head. It’s such a 180 degree turn that you’re caught off guard. It really through off my enjoyment of the film, which is a shame because there are some great moments. One of my favorite concerns a scene where Fred, who has introduced himself to his neighbors as a writer (he uses the ruse to write his memoirs as a crime boss) is invited to help discuss a popular American film. However, when he gets there the wrong film has been shipped. The new film is one of the best “in” jokes I’ve seen on film over the past few years and “The Family” is almost worth the price of admission just for these few moments.