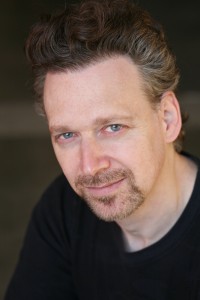 Wayne Kramer is the director of the “Pawn Shop Chronicles”, which has an epic cast including Paul Walker, Kevin Rankin, Elijah Wood, Brendan Fraser, Vincent D’Onofrio, Thomas Jane, Matt Dillon and Lukas Haas. Wayne has directed other recent films as well including “The Cooler”, “Running Scared” (also with Paul Walker) and “Crossing Over”. Media Mikes had a chance to chat with Wayne about this crazy fun film and how he achieve the feeling of watching a graphic novel coming to life.

Mike Gencarelli: How did you become attached to direct “Pawn Shop Chronicles”?
Wayne Kramer: I was originally talking to Paul Walker about directing him in a script that I had written, but it was having some difficulty getting set-up. Paul was already attached to “Pawn Shop” and when the original director fell out, he called me up and asked if I would be interested in coming on board because it was already financed and ready to go. I was initially reluctant because the budget was quite low and I was only looking to direct my own projects, but I read the script (by Adam Minarovich) out of a courtesy to Paul. I was immediately taken with it. I appealed to my sick sense of humor and I also enjoyed the more surreal aspects of the world Adam created. I also felt that the material would allow me to bring a certain fun filmmaking style to the piece, if we could figure out how to get there on such a low budget.

MG: From the moment the movie starts its feels like you are watching a graphic novel come to life, tell us about how you achieved that aspect?
WK: Upon first reading the script, I felt it required a very stylized, almost Tex Avery-ish approach. Despite the lazy critical assessment that we ripped-off Tarantino (I get this on every film – and it pisses me off to no end because I’ve never been influenced by Quentin’s films, but it’s clear that we share many of the same influences: De Palma, Peckinpah, Aldrich, Hill, etc.), my initial feeling was that PAWN SHOP belonged in a universe that felt like a cross between early Coen Brothers (“Raising Arizona”, “Big Lebowski”, “O Brother…”) and 70’s revenge/exploitation themed films like “White Lightning” and “Prime Cut”. The more I played around with it in pre-production, I started to pick up on a “Creepshow” meets “Crumb” kinda vibe as well – in that the actual storylines felt like something from old EERIE COMICS with a Redneck flavor to them. It’s a whole stew of whacky influences hopefully stirred into its own original thing. I just have to say, it’s near impossible for any filmmaker to escape the shadow of “Pulp Fiction” when telling an anthology crime story and it infuriates me in that’s the first thing film illiterate critics glom onto. Aside from one wink at “Pulp Fiction” about Alton’s brother being killed in a pawn shop on the west coast(which was always in Adam’s script and in hindsight, I probably should have cut), PULP was the furthest thing from our minds.

MG: How was it reuniting with Paul Walker and putting him in such a unique role?
WK: It was a blast working with Paul again. He’s the most game actor I’ve ever worked with and gives nothing less than 100 percent each time. We share the same sensibility when it comes to dark, kick-ass material, so it’s never a battle of wills when we get on the set. He’s also the kind of actor that always has the 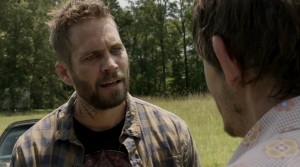 director’s back and as a filmmaker you couldn’t ask for anything more. Paul is also a producer on PAWN SHOP, so he had a little more invested than just turning up and focusing on his own character.

MG:  Let’s talk about the rest of the cast, how did you gather all this great talent together?
WK: Well, once a film gets greenlit, you just start moving ahead and word gets out that the film is happening and agents start doing their thing, which is to get work for their clients and somehow it all just falls into place. I was super thrilled when Matt Dillon agreed to play Richard because Matt’s an actor I’ve always loved and thankfully he also turned out to be a joy to work with. I honestly think Matt had the most difficult role to pull off in the film because the leap his character makes tonally in just a few hours is insane and I don’t think many actors without Matt’s subtle comedic chops could have pulled it off. It felt to me like he was channeling Bruce Campbell circa EVIL DEAD towards the end there with his manic hysteria. I had met with Vincent D’Onofrio a few months earlier and he had a great take on Alton and thankfully it worked out and he ended up in the film. Vincent was another amazing actor to work with. I’d love to do anything with him in the future. Brendan Fraser really came and invested himself in the character and it was hysterical to watch him disappear into Ricky every day. He had the most difficult schedule on the film, having to fly in and out of Louisiana several times to accommodate his character turning up all over the schedule. We were also lucky to fit Elijah Wood into a very tight window as well and he was a total soldier for his few days on the film since he had to wear a very uncomfortable and complicated make-up rig, which he never ever complained about. Super cool guy and a total fan of the genre. I think one of the most exciting additions to our cast was Kevin Rankin as Randy, Raw Dog’s partner in crime. Kevin is the consummate actor and just disappears inside every character he plays. I didn’t even realize until we were a few days into shooting that he played the character of Devil on “Justified,” a show I’m a huge fan of. I also have to commend Pell James for having the courage to take on the role of Cyndi. She’s virtually unrecognizable in the part and we only see her clothed one time in a quick flashback moment – so she has my undying respect. She also happens to be an incredibly talented actor who should be doing way more movies. I’ve been friends with Thomas Jane for quite some time and he was kind enough to agree to play The Man for me, which I think is a fun little cameo. Another actor that should be working more often – and on bigger films. Same goes for Lukas Haas who was another joy to work with. We got very, very lucky with the cast and I hope to work with all of them again at some point.

MG:  Tell us about your decisions to switch aspect ratios between each segment?
WK:  I was just having some fun with some of the faux Sergio Leone type moments in each chronicle. The arrival of The Man felt like it wanted to be in widescreen, almost like those old Marlboro ads that played in movie theaters (it was probably more an international cinema thing because I saw them in South Africa when I was a kid and we saw a lot of commercials before the main feature started). When Matt Dillon faces off against Michael Cudlitz, it felt like it warranted a similar aspect ratio gag – and when Brendan Fraser’s Elvis impersonator arrives in front of the barber shops, again, I felt like it 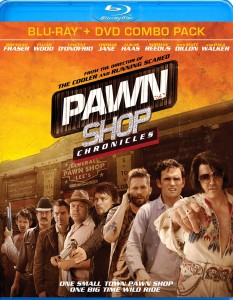 was almost a classical western motif of the stranger come to town. Having an aspect ratio gag in each chronicle also created a visual commonality between all three stories and for me is a reminder of the tongue in cheek approach to the film.

MG:  What was the biggest challenge of entwining these three segments together?
WK: I think the biggest challenge was taking three tonally very different stories and trying to make them fit within the same narrative. We jump from a Tex Averystyle, madcap Hillbilly episode to a darkly humorous Southern Gothic revenge story, to a more comedic take on the musician meeting the Devil at mythical crossroads in the deep South. But if someone looks a little deeper at the film, they will see a fun subtext about the town of Erwin, Georgia being purgatory and all the (morally dubious) characters coming through the portal of the pawn shop being challenged to make choices that decide their very fates. We buried lots of Satanic imagery throughout the film, some more obvious than others. There are pentagrams carved into the tables of the barbecue joint, which is also called “Lou’s Fire Pit” as in Lucifer, which features a very hellish red color motif. JJ gets his face burned into the seal of the smoker which reads, “Holy Smokes.” The meth lab goes up in hell fire… Satan makes a deal for Ricky’s soul by transforming him into Elvis for four minutes on stage… The liquor store with the blues player out front is called Cross Roads Liquor and the address is 666 Charon Street… The liquor store also has a painted clock sign with no hands suggesting time has stopped in this town. We have creepy, featureless masks on some of the carnival extras – if you look carefully, you’ll see them at times. Some of the girls at the carnival are also holding little devil dolls. Many other references as well…

MG: What do you have planned next?
WK: I’ve got a bunch of irons in the fire. It’s hard to talk about them until they actually get greenlit. I may be doing another film with Alec Baldwin (and Patrick Wilson) next year, so I’m really looking forward to that.