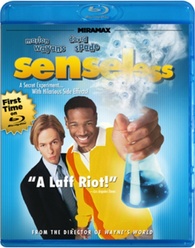 After getting “Don’t Be a Menace to South Central While Drinking Your Juice in the Hood”, “Senseless” may not be the most smartest comedy but is damn funny. The thing is that you kind of expected a little more from director Penelope Spheeris, who is known for great comedies like “Wayne’s World” and “Black Sheep”. But I don’t care this film still makes me laugh, it is zany over-the-top and just plain stupid. Call it a guilty pleasure I guess but there isn’t a week that goes by that my father or myself do not quote this film. “CORN!!! I didn’t eat no CORN!!!” Classic!

Official Premise: Perpetually poor Darryl (Marlon Wayans) is destined to lose his dream Wall Street job to a wealthy snob (David Spade)…until he volunteers for a high-paying scientific experiment that gives him superhuman senses and the competitive edge he needs. But when the side effects start, he finds his chances for success sabotaged by attacks of sensory overload.

Echo Bridge released this film on Blu-ray for the first time with a damn impressive high definition 1080p transfer.  I know the film is just a comedy but it is sharp and real step up from the last DVD release.  It is presented in widescreen 16×9 with an aspect ratio of 1.78:1. The DTS-HD Master Audio 2.0 also does the trick for the film and is very impressive as well. Since this film is all about the senses, the Blu-ray really does a good job of successfully deliver in both the audio and visual department.  Unlike most Echo Bridge releases “Senseless” actually comes with a Behind the Scenes featurette called “Play N Hockey”.  It is not much but at least it is a special features and better than a bare bones release.