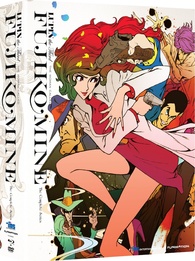 “Lupin the Third: The Woman Called Fujiko Mine” is a new Japanese anime series from 2012 that is based on Monkey Punch’s “Lupin III” manga. I have always been a huge fan of the original animated series as well. So I am excited to see the franchise come back with a new series. There are over 200 episodes of “Lupin the Third” over it’s past three series, so I am a little upset that there are only 13 episodes included but they are still 13 fantastic episodes. I haven’t seen this show in year and yet picking up with this series it is like I just finished watching series three yesterday. FUNimation is behind this Blu-ray release and I hope they know that they NEED to be releasing the first three “Lupin the Third” series after this. This is a must for any fan of this great franchise.

Official Premise: She’s a thief. A killer. A saint and a scandal. She’s whatever you need her to be to get the job done. After sizing you up with one sinful glance, she disarms you with a touch. You’re powerless to resist. She’s walking seduction, with an insatiable itch for the priceless and a fetish for mischief. She takes your breath away to get what she wants. She takes everything else just because she can. It’s all in a night’s work for the woman called Fujiko Mine. She’s the slinky, sultry thread that holds Lupin III’s crew together – and this is the heist that started it all.

The episodes included in this series are “Master Thief vs. Lady Looter”, “.357 Magnum”, “The Girl and the Samurai”, “Living in Love, Living in Song”, “Blood-Stained Pyramid”, “Prison of Love”, “Music and Revolution”, “Death Day”, “Steamy Desire”, “Dead City”, “Feast of Fools”, “The Woman Called Fujiko Mine, Part 1”, “The Woman Called Fujiko Mine, Part 2”.

Funimation delivers “Lupin the Third: The Woman Called Fujiko Mine” with two releases, a standard version and a limited edition version also including an art book. Both versions are 4-disc BD/DVD combo releases. I love how Funimation always delivers both a Blu-ray and DVD release for their shows.  This series comes with both Japanese and English audio tracks.  Having found this show on Adult Swim many years ago, I am a fan of the English track the most. The special features are worth checking out as well after you finish watching this series.  There are commentary track for episodes 6 & 9. There is a “Lupin the Third: The Woman Called Fujiko Mine” Cast Reunion. “Fujiko Mine at OkraTron 5000” is a look into the show at the audio production company.  There is also an Textless Opening & Closing Songs and trailers included.