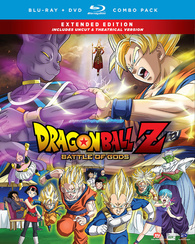 The first new “Dragon Ball” feature film in over seventeen years?! Yeah sign me up!! “”Dragon Ball Z: Battle of Gods” is a hell of a good time. I saw this film in theaters during its limited run and it was a real blast. The audience loved and we all really just loved seeing a new “Dragon Ball” feature. I think that diehard fans are going to love this as well (or loved it since it they are diehard fans they should have seen in theaters like me). I hope that the success of this film, still shows that there is plenty of demand for “Dragon Ball” content in the U.S., so I hope that they have future films planned as well. We are more FUNimation!! Bring it on!

Official Premise: Following the events of the Dragon Ball Z television series, after the defeat of Majin Buu, a new power awakens and threatens humanity. Beerus, an ancient and powerful God of Destruction, searches for Goku after hearing rumors of the Saiyan warrior who defeated Frieza. Realizing the threat Beerus poses to their home planet, the Z-fighters must find a way to stop him before it’s too late. Only Goku, humanity’s last hope, can ascend to the level of a legendary Super Saiyan God and stop Beerus’s from destroying Earth, and possibly the entire universe!

“Dragon Ball Z: Battle of Gods” delivered a solid Blu-ray presentation courtesy of FUNimation Entertainment The 1080p transfer in 1.78:1 looks amazing with this films colors and animation style. It keeps the original series look with not too much of an upgrade in terms of style but it just looks very polished and sharp. Same goes for the audio tracks. There are Dolby TrueHD 5.1 tracks for both Japanese and English on the Theatrical Version of the film and and an English Dolby TrueHD 5.1 and Japanese Dolby TrueHD 2.0 track for the Uncut Version. Either one really rules personally. I originall saw it in English but I love DBZ in Japanese as wel.

The Blu-ray contains as a mentioned, two cuts of the film the Theatrical cut runs about 85 minutes, while the Uncut version runs about 105 minutes. Obviously, I love DBZ so the longer the better for me. The film already had slight pacing issues at 85 minutes, so it runs a little long but I still can’t get enough personally. In terms of special features, we get a Behind the Scenes look into the film with “Battle of Voice Actors” and also similarly “The Voices of Dragon Ball Z Unveiled”, which touches on the cast. There is also a Textless Closing Song and U.S. Trailer included.