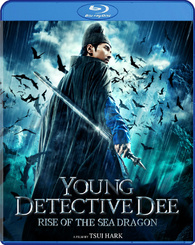 When I see a film from Tsui Hark, I don’t care what it is I just immediately add it to my list. I did that with his 2011 film, “Detective Dee and the Mystery of the Phantom Flame” and was so glad that I did since it was amazing. “Young Detective Dee: Rise of The Sea Dragon” is a prequel to that film and really amps up the ante. In fact, the prequel improves not only the story but also the visual effects. I felt like huge-budget epic summer film. Epic is the word that comes to my mind. What I also liked most is that this film is well-balanced and is exciting in the beginning, the middle and ridiculously awesome in the third act. Highly recommend to watch this film (but if possible in 3D, see below)

Official Premise: From legendary action director Tsui Hark and the creators of international smash hit “Detective Dee and the Mystery of the Phantom Flame” comes the captivating tale of Dee Renjie s beginnings in the Imperial police force. His very first case, investigating reports of a sea monster terrorizing the town, reveals a sinister conspiracy of treachery and betrayal, leading to the highest reaches of the Imperial family.

I am really upset with not being able view this film in its intended 3D format. The film really sets up a lot of its visual effects with the added dimension and I felt like I missing a lot here. This is not the first time that Well-Go has done this either. They released terrible films like “Dino King 3D”, “Sadako 3D” and “Tormented 3D” all with 3D Blu-ray releases, so I have no idea why they have cheaped out on titles like this one, which would have been AMAZING in 3D. Bad move! To top it off there are no special features either. Great movie, terrible Blu-ray. I would try and import this release and get the 7.1 Dolby HD track with 3D Blu-ray.