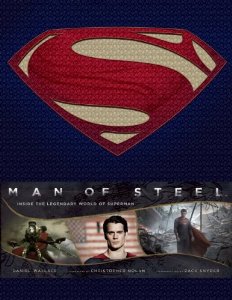 When I saw “Man of Steel”, I spent the 2.5 hours in awe of what a visual film it was. I love Zack Snyder’s style and I think it was very clear and sharp in this film.  Insight Editions has always been consistent with releasing great Art of and Visual Companion books. This book is a bit of both and continues the excellent trend.  It is pretty awesome and definitely will leave any fan satisfied.  It doesn’t deliver any new or hidden secrets of the film but it does represent the visual aspect quite well. If you are a fan of Superman, this would be highly recommended but be warned be sure to see the film first cause it is chock filled of visual spoilers.

Official Premise: In Man of Steel, director Zack Snyder (300, Watchmen) and producer Christopher Nolan (The Dark Knight Trilogy) have delivered a stunning new vision of Superman that is both fresh and familiar. Man of Steel: Inside the Legendary World of Superman explores the remarkable creative process behind the movie and showcases the exceptional concept art that shaped its unique visual style. From the stark alien vistas of Krypton to the down-to-earth warmth of Smallville, this book uncovers the intensive world-building process that makes Superman’s universe both thrilling and believable. Also featuring in-depth interviews with the cast and crew, and candid on-set photography, Man of Steel: Inside the Legendary World of Superman is the ultimate insider’s look at one of the most electrifying movies in recent memory.

“Man of Steel: Inside the Legendary World of Superman” starts off looking into the “Modern-Day Mythmaking” of the film including a look at the new suit. There is a big section on the film’s casting, which was critical (and successful) aspect of this reboot. Then from there we get to take a trip to Krypton and see the marvels that Snyder gave us that has never been shown before on that planet. Lastly we get to go to Earth and visit Metropolis and Smallville. The only aspect missing that I would have liked to see is chapter on the “Tornado” scene. The author, Daniel Wallace, is a comic book expert and self-labeled geek (like us all). He is no stranger to comics with having authored “DC Comics Year by Year” and “The Marvel Encyclopedia”.  We also get a great foreword by Christopher Nolan (“The Dark Knight”) and an awesome intro by director Zack Snyder.  There was a lot of love given to this project to satisfy fans and it is shown in this book.