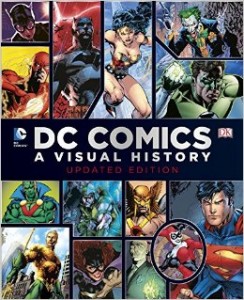 DC Comics is becoming much more relevant recently following the success of Marvels. Especially with the bunch of new films announced by DC including “Batman v Superman: Dawn of Justice”, fans are going to be looking for history of these characters in preparation for the films. This updated and expanded edition of “DC Comics: A Visual History” is a must have for any comic fan. It includes 16 new pages to cover 2010-2014 and an amazing new slipcase design along with two NEW prints packed inside. This has everything any fan would want to find out. It is detailed as hell and jam-packed with amazing information.

Official Premise: Trace DC’s fascinating story: the company’s beginnings as National Allied Publications in the 1934, and its subsequent change to Detective Comics, Inc. in 1937. The book details all the major DC publishing landmarks and more, displayed clearly, month by month. Highlighting the debuts of iconic super heroes like Superman and Batman, the geniuses that invented them, and the real-life events, like the Vietnam War, the atom bomb, and the Space Race, that shaped the atmosphere of the times, DC Comics: A Visual History follows the characters’ foray into the real world through TV series and blockbuster movies.

There is a solid foreword from former president of DC Comics (2002-2009), Paul Levitz. I have to admit, even though I have been a huge Batman and Superman fan since I was a kid, I have never been too big on the rest of the universe that was surrounding them. After reading this book, I understand that it is quite massive and really exciting to see what is set to come in the future. DK did an amazing job on this release, it is a literally a marvel (no pun intended) to look at and is so detailed, colorful and there is not an inch wasted throughout as it is filled with amazing images and facts.