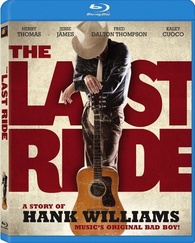 When you think of country music, it is hard not to think about Hank Williams. He will always be considered one of the most legendary country artists of all-time.  This little indie features a pretty impressive cast including Henry Thomas (“E.T.”), Jesse James (“Jumper”), Kaley Cuoco (“The Big Bang Theory”), Fred Dalton Thompson (“Law & Order”) and Stephen Tobolowsky (“Groundhog Day”). The cast does what they can from the fairly weak script. I don’t think that this is going to convert people to listen to country music but definitely worth checking out if you are a fan.

Official Premise: Based on the controversial life story of singer-songwriter, Hank Williams, THE LAST RIDE tells the powerful tale of country music’s original bad boy. The man, the myth and the music come together when Williams travels from Alabama to a series of New Years shows in West Virginia and Ohio. This remarkable journey leads straight into the heart and soul of the legendary performer…as he takes one last shot at redemption. Featuring all-new versions of Hank Williams’ greatest songs, this emotional tale of hope and truth is one you’ll never forget.

The Blu-ray presentation is impressive despite the low-budget of the film.  The 1080p transfer is not going to win any awards but its delivers a clear presentation.  Of course when it comes to Hank Williams, the music is key.  So the DTS-HD Master Audio 5.1 track is quite impressive and delivers the tunes quite well. In terms of special features there is only one extra included, which is a short featurette titled “A Look Inside The Last Ride”. I would have loved to seen more in this department. Commentary tracks would have been a nice bonus.