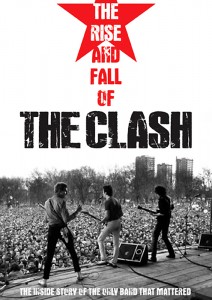 “The Rise and Fall of the Clash” takes a look at the life-changing effects that The Clash had on a generation. The film tells the fascinating inside story of rivalries, treachery, betrayal and the internal dynamics and managerial interference that ultimately led “the biggest band in the world” to self destruct. Directed by Danny Garcia the film is packed full with rare and candid interviews from surviving band members and those who were with the band on their rocket like rise to stardom and their irrevocable fall from grace.

Being a fan of The Clash I wish I could tell you that this DVD is one you have to have for your collection. Sadly that is not the case. Though not a bad film per say it didn’t live up to the hype of the listed highlights shown the back of the packaging which boasted “new interviews” and “rare performance and archival footage”. Yes there may have been some new interviews however the same story that we all have heard countless times was basically just restated in a poorly edited piece of film. At several points during my viewing of the film I had to stop the movie just to try and figure out where the film/band was chronologically in their history and what relation the story being told had to that place and time. If the poor editing wasn’t enough the interviews sound quality wasn’t anything spectacular nor was the lighting which at times made the scenes that may have actually been interesting very dark and unappealing to the eye.

If anything can be taken from “The Rise and Fall of the Clash” DVD it should be merely accepted as a collective piece for hardcore fans of the band and not something containing “new” material as found very little if anything that truly could be considered new.

Filed Under: DVD/Blu-Ray Reviews Tagged With: