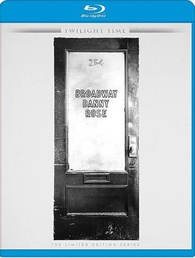 “Broadway Danny Rose” is easily one of my favorite films in Woody Allen’s filmography. Even having seen the film numerous times it is still able to deliver some great laugh out loud moments. It also has its sweet and endearing moments as well. Mia Farrow is stunning the role and very funny as well. Fun fact, the part of Lou Canova was originally offered to Sylvester Stallone. Twilight Time has been given us Woody Allen fans quite the treat with his films being released on on Blu-ray recently. This one follows the equally amazing “Crimes and Misdemeanors”. So I have to say that this is definitely a must for any fan of Allen’s work.

Official Premise: Broadway Danny Rose (1984), starring, written, and directed by Woody Allen, gives us a variation on his patented schlub character: this time, the eponymous good-hearted talent agent who represents not just the worst but the most pathetic acts in show business. Among these is Lou Canova (Nick Apollo Forte), a corny lounge singer saddled with a drinking problem and a temperamental mistress, Tina Vitale (Mia Farrow, in a terrific comic performance). When Lou asks Danny to be his beard with Tina, the wimpy agent suddenly finds himself dealing with the Mob—and with the feisty Tina, herself.

This Blu-ray release is an Screen Archives Entertainment Exclusive and is a Limited Edition release with only 3000 copies produced. “Broadway Danny Rose” is the third Twilight Time film I have reviewed this month and each of them has just been so impressive. This film is delivered with a very sharp 1080p transfer in 1.85:1 that is beautifully rendered in black-and-white by cinematographer Gordon Willis. The DTS-HD Master Audio Mono also works perfect with the dialogue and score. In terms of special features, besides some trailers there is only an Isolated Music and Effects Track as well. Which is worth checking out if you enjoyed the score like myself.