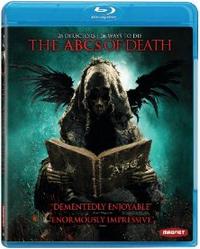 Yeah…I am not sure how to easily explain this film.  “The ABCs of Death” consists of 26 short films from 26 different directors from all over the world.  Some of these are downright awesome and some of them are absolutely terrible.  I am still recommending this film just because it is so unique and like nothing I have ever seen before. In case you haven’t caught on each director was given a letter and complete creative freedom.  The shorts range from live-action to hand drawn animated to claymation. So there is tons of variety here.  If you are a horror fan, this is easily one of the most creative films you will see this year…as long as you have a tough stomach!

I would love to list all the clever names for each show but for me finding out during the film was part of the fun. When I was watching, I was constantly trying to figure out what the hell was going on and what was the short going to be called. I will giveaway two of them since they were the most obvious. I am not going to give the premise away but I will tell you the names. One of my favorites was “D is for Dogfight”, it was well done and very clever with only one word of dialogue.  The absolute worst was “F is for Fart”, go figure it was made in Japan, which is downright stupid and just gross.  I like a good fart joke but this was terrible. That is another thing some of these shorts is that all of them don’t all fit in the horror genre either except for the fact of dealing with death.

Official Premise: Twenty-six directors. Twenty-six ways to die. The ABC’s OF DEATH is perhaps the most ambitious anthology film ever conceived with productions spanning fifteen countries and featuring segments directed by over two dozen of the world’s leading talents in contemporary genre film. Inspired by children’s educational books, the motion picture is comprised of twenty-six individual chapters; each helmed by a different director assigned a letter of the alphabet. The directors were then given free reign in choosing a word to create a story involving death. Provocative, shocking, funny and ultimately confrontational, THE ABC’s OF DEATH is the definitive vision of modern horror diversity.

This Blu-ray being reviewing is the 1-disc Blu-ray version.  It also features an alternate cover which the baby holding the book has been removed. I personally prefer the originally artwork, which is only available on the 2-disc combo pack with a Blu-ray and DVD of the film. The 1080p transfers look good for the most part but constantly various in quality since there is many different types of camera options used for each short.  The same goes for the DTS-HD Master Audio 5.1 audio tracks.  It various from short to short but all around sounds decent.

The special features are quite impressive for this release. Get ready for this…there is a filmmaker commentary track on each short. I think that is a real treat because you can get to hear the vision behind each film. There are also extras included for 14 out of the 26 shorts. Including the letter A has a visual effects featurette. The letters B, D and I have a Making Of featurette. C includes some Deleted Scenes. F, H, J, T, V, W and Z all have Behind the Scenes looks and R has a Behind the Scenes Photo Gallery with 71 photos. Lastly there is “AXS TV: A Look at The ABCs of Death”, which runs under five minutes and some trailers included.