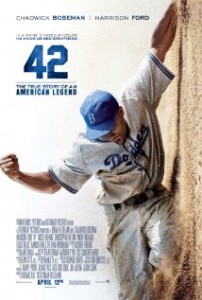 If you ask most people who Jackie Robinson was they can tell you he was a baseball player. Some may even know that he was the first African-American to play in the major leagues. But few really know the struggles he went through, both personally and professionally, to achieve his goals. On April 15, 1947, Jackie Robinson came to bat for the Brooklyn Dodgers for the first time. Six decades later his story is being told on the big screen in the uplifting film “42.”

1946. Branch Rickey (Ford) runs the Brooklyn Dodgers. He’s a man with two passions: fairness and business. He has toyed in the past with the idea of signing a black ball player but has always been discouraged by his fellow executives. With World War II over and more people than ever back home working Rickey also realizes that black baseball fans have a color in common with white ones: green. After considering several possible players he zeroes in on Jackie Robinson, currently playing shortstop for the Kansas City Monarchs in the Negro Leagues. The two meet and things go well. But Rickey has one condition that Jackie must accept. No matter what people say or do in regards to his being on the field he must not retaliate. “You mean you want a player who doesn’t have the guts to fight back,” he asks Rickey. “No,” Rickey replies, “I want a player who has the guts NOT to fight back.” After thinking it over Jackie tells him, “you give me a uniform…a number on my back. I’ll give you the guts!”

Smartly written and directed by Oscar winner Brian Helgeland (“L.A. Confidential”), “42” is a story of quiet dignity and pride standing up in the face of adversity. The story is told through the eyes of black sportswriter Wendell Smith (Holland), who Rickey has assigned to cover Robinson as well as look out for him. As he sits along the third base line with his typewriter on his lap (blacks were not allowed in the press box at that time), Smith documents every accomplishment and setback Robinson undergoes. And it’s not an easy journey. Minor league baseball fans in Canada are just as vile as those in the deep American south (a caution to parents – the “N” word is thrown out on several occasions). But Robinson plays well and earns a spot on the major league roster the next year. This causes a rift among the Dodgers, many of whom send a petition to Rickey declaring they won’t play with Jackie. Only when Pee Wee Reese (Lucas Black), a good old boy from Kentucky, embraces Jackie (both figuratively and literally) do the players begin to come around. It all boils down to one thing…Jackie can play ball and that’s all that matters.

The performances down the line are outstanding. Boseman hits just the right notes as Robinson. He’s not a saint. He’s a man, with many of the same flaws all men have. He wears his emotions on his sleeve and he’s not afraid to show them. Holland is just as good, acting almost as a Greek chorus, carrying the story along with his words. As Rachel Robinson, Jackie’s wife, Nicole Beharie is strong and supportive while still independent enough to speak her mind. Christopher Meloni makes manager Leo Durocher bigger than life in a spirited performance. And on a personal note it’s a treat to see “Barney Miller” star Max Gail back on the big screen. As the manager hired to replace a suspended Durocher he brings a quiet and old fashioned charm to the role. But the acting standout here is Ford. So well known for his big budget adventure films, younger fans may not know that the man has shown some serious acting chops in the past (“Witness,” “Mosquito Coast”). Here he works his magic, making Rickey one part kindly grandfather and one part shrewd businessman in a performance that will hopefully be remembered come Oscar time.

The period settings are well done as are the baseball scenes. But baseball is really the secondary story here. The first is the story of a man who accepted the challenge given him and, because he did, changed the world.