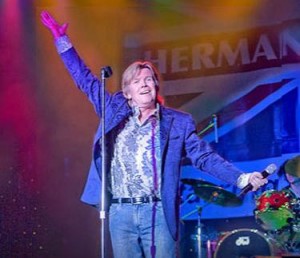 Born in Manchester, England, Peter Noone got an early taste of fame when, as a teenager, he appeared on the British television program “Coronation Street.” The show, still going after more then five decades, also boasts such famous alumni as Ben Kingsley, Cliff Richard, Davy Jones and “Law and Order” star Linus Roache. He studied voice and music in college and then attended the Manchester School of Music, where he won the Outstanding Young Musician Award.

It was while performing under the name Peter Novak that he an his group were discovered. Bearing a slight resemblance to a popular U.S. cartoon character, Noone and company became Herman’s Hermits. The band had several hits, both in England and America, including “I’m Into Something Good,” “Mrs. Brown You’ve Got A Lovely Daughter” and “Henry the Eighth I Am.” Noone and the boys separated in 1971 and he continues to enjoy a popular solo career both in music and acting. While getting ready for the next leg of his U.S. concert tour, Mr. Noone took time out to speak with Media Mikes about the importance of “Coronation Street,” his long friendship with the late Davy Jones and why he doesn’t care if he’s ever inducted into the Rock and Roll Hall of Fame.

Mike Smith: You’ve been performing on stage since you were 15. Do you still get the same thrill and feelings when you step in front of an audience today as you did in your youth?
Peter Noone: I think I started a long time before I was 15, but always get a thrill doing what I do, which is make it look easy and fun, although it isn’t easy and not always fun. But something unknown makes me want to sort of “win” a crowd, so there have been close calls and easy calls just like an athlete. I must admit that it is more fun now that the crowd knows my music and my songs, and all I have to do is have fun and let them sing along.

MS: As a young man you appeared as Stanley Fairclough on the very popular “Coronation

Street,” which has been on the air since 1960. Were you ever a fan of the show and can you explain how the show has maintained it’s popularity for over 50 years?
PN: I am shocked that the show has continued to be a success without me in it, but `I will say that the original cast were the source of much inspiration as they were consummate professionals and always backed each other (and often me) so that if someone forgot a line it was never an issue and I learned (like the marines) to be ready to pick up any slight failures. I now look forward to something going wrong onstage so I can fix it like those early “Coronation Street” actors and actresses did way back then. It is the British version of Dallas and is the story of relationships in a small English town where people care about each other so I imagine there will always be an audience for it as long as people seek that lifestyle.

MS: I’ve read several different stories on how Herman’s Hermits got their name. The most repeated one is that a producer thought you bore a resemblance to the young lad Sherman, Mr. Peabody’s assistant, on the “Rocky and Bullwinkle” program. Can you set the record straight?
PN: It was a publicist at a place near Manchester who said that I didn’t look like Buddy Holly in my horn rimmed glasses but I did look like “HERMAN” from the “Bullwinkle” show. He meant Sherman but we laughed and then he said call the lads “the Hermits because they look like bloody hermits!”

MS: You voiced the character of Adrian on “Phineas and Ferb” alongside Davy Jones, who was Nigel. Sadly we lost Davy Jones last year. Do you have a favorite memory of him that you could share?
PN: I have lots of favorite moments with Davy, whom I first met when I introduced him to the Beatles at “Top of the Pops” at the BBC in London all those years ago. He and Mickey Dolenz were charming and delightful, and very conscious of who the Beatles were and what they represented. Davy was from Manchester like myself and had the type of Northern humor that the Fab Four understood. We always got along great,and did many projects together. I played his manager on the TV show “My Two Dads” and we did many concerts together….probably more than he did with The Monkees. It’s sad that he went just when he seemed to be having 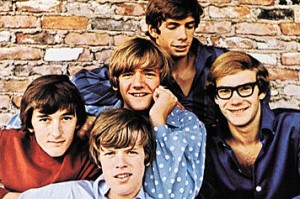 more fun than ever.

MS: You continue to tour. What is it about your music that continually adds new fans from new generations?
PN: I think it is my optimism and naiveté that contrasts with many other oldies acts who seem to just go through the motions. I believe in all my songs and their messages and look forward to the next performance as being the best one yet! The audiences know!

MS: Though the Beatles and the Rolling Stones are in the Rock and Roll Hall of Fame, there are only a handful of other “British Invasion” bands (Dave Clark 5, the Hollies) inducted. Do you think Herman’s Hermits will one day be elected?
PN: I doubt it, because the people who vote don’t think my group was important, and I agree with them. We never wanted to be loved by the critics, We wanted a following who loved us.

To find out if Mr. Noone will be appearing in your area visit, click here.