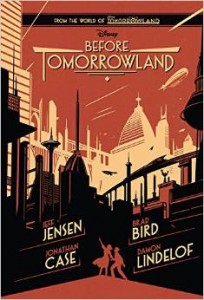 “Tomorrowland” is easily one of my most anticipated films of 2015. Brad Bird (director of “The Incredibles” & “Ratatouille”) with George Clooney starring sounds like an instant win. “Before Tomorrowland” is a really neat original prequel novel to the film that also features a 20-page comic book. It is a nice introduction to the movie and actually successfully got me even more excited for the film.

Official Premise: The year is 1939. A secret society of extraordinary geniuses is about to share an incredible discovery with the world. A misguided enemy–half man, half machine–will stop at nothing to prevent the group from giving this forbidden knowledge to humanity. And a mother and son on vacation in New York City are handed a comic book infused with a secret code that will lead them straight into the crossfires of the conspiracy.

Even though this book is set in 1939, this sci-fi adventure has a very futuristic sort of steampunk feel to it, which I really enjoy. There is another book smile to this called “Clockwork Angels” that this reminded me of. The illustrations throughout and the minicomic at the book are both a really nice bonus. There is something about having a book with drawing throughout. It helps me with the visual process.

The mean behind this novel is the co-producer, co-writer and director of “Tomorrowland”, Brad Bird aka director of “The Incredibles” & “Ratatouille”; co-producer, co-writer, Damon Lindelof, known best for being the head writer for the critically-acclaimed ABC show,”Lost”; fellow co-writer of “Tomorrowland” and also senior writer for Entertainment Weekly, Jeff Jensen and lastly artist Jonathan Case, known for graphic novel, “Dear Creature”. No shortage of talent here at all, which make this novel a win!