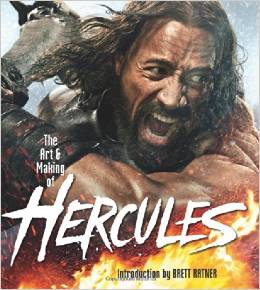 Dwayne “The Rock” Johnson is at the top of his game right now. He has taken over franchises like “Fast & Furious”, “G.I. Joe” and even “Journey to the Center of the Earth” and is still on fire. “Hercules” though doesn’t really look like a great next choice for him. Especially after this January’s very weak “Hercules” entry, people do not really seem to be craving for much more of the legendary hero. If you are unlike me and are looking forward to this film, there are more than 200 photos and drawings in this illustrated companion to this live-action adventure tentpole film

Film Premise: Fate has not been kind to Hercules. The legendary hero-warrior has endured the twelve harsh labors and the loss of his family, and he is now a world-weary mercenary with a loyal band of fighters, all seeking redemption for past misdeeds. In this new adventure, he agrees to help the King of Thrace build an army to fight a tyrannical warlord, then finds himself tested once more when he discovers unexpected treachery and betrayal. But for good to triumph and justice to prevail, Hercules must face the sins of his past—and embrace the hero he once was.

The film itself is quite a large scale film, it was all shot on location in Budapest with actual locations, sets, kingdoms, battles, weapons, warriors etc from the world centuries ago. So this book does go into some of the details of those challenges dealing with the sets, costumes, battle sequences. There storyboards, concept art, commentaries from the cast and crew, and even a few extracts from graphic novel and comic book script. In case you didn’t know this is being based on a graphic novel (I didn’t). So there is definitely some good info here, I just read a lot of art of/making of books and this is definitely not my favorite.