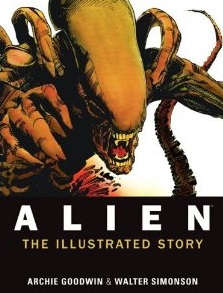 From the moment that I opened this book, I was in love. I was immediately transported back to my childhood days of comic book readings. There was just something about this that immediately captured me. I am not sure if it was the design style, the animation or maybe just colors. This book was original done back in 1979 and has been out of print for over thirty years. This edition is brand new and has been completely and meticulously restored using the original Simonson’s original artwork.

The book was written by the late Archie Goodwin, the comic book writer, known best for his Warren and Marvel Comics work. He was also the chief writer and editor of landmark horror anthology titles Creepy and Eerie. On a graphic novel, the illustrator is really the star of the show. Walt Simonson is the man behind this one and he has written, penciled or inked Batman, Fantastic Four, The Hulk and Superman just to name but a few!

I remember watching this film sneaking behind my parents back and being absolutely terrified. I have found that this excitement and terror was immediately brought back after reading this stunning color graphic novel of Ridley Scott’s legendary sci-fi thriller! Overall if you are looking to get transported through time back to your childhood, then this is for you at at a low price of around $10. If you are looking for the Original Art Hardcover Edition, it will also be released by Titan Books on October 30, 2012 timed with the Blu-ray release of “Prometheus”.