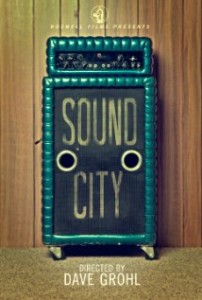 “Sound City” written by Mark Monroe and directed by Foo Fighters frontman Dave Grohl tells the fabled story of Sound City Studios a recording studio in Southern California that turned out such classic albums as Nirvana’s “Nevermind”, Fleetwood Mac’s “Rumors” and Neil Young’s “After the Gold Rush” just to name a few. Part documentary and part memoir told by the artists and staff that worked and recorded there throughout the highs and lows of the studios 40+ years of existence.

Yes “Sound City” is another documentary in a market that is already saturated with documentaries that range from eating out of dumpsters to living off of Craiglist but, this film is more than just another stock documentary or a niche film strictly for music fans. Instead the film touches on the bond various people had with this one special place that wasn’t always for everyone. Sound City was the jewel in the rough. When many artists wanted lavish recording studios with hot tubs and other modern day accoutrements Sound Studio remained true to what it was. A place to record music and that was it. As the film progresses we see how various events impacted the studio and the people involved with it. As the studio succumbs to the evolution of digital recording Grohl and company find a way for the studios legendary mixing board to live on.

Interesting stories and great music made the 108 minutes I spent watching the film well worth it. The film draws you in due in part to the charisma and dedication of those featured in the film. There was just something really great about seeing and hearing all these stories that probably would never been hear had it not been for Grohl and company.