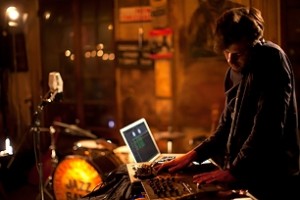 In “Re:Generation”, acclaimed director Amir Bar-Lev (“The Tillman Story”, “My Kid Could Paint That”), has gathered an incredible amount of musical talent for a documentary that is well suited for the iPod era.

The main concept of this film is a simple one. Five popular DJs are partnered with musical genres they rarely if ever work with and each is expected to create a whole new track in a matter of days. This leads to pairings as unusual as electronic music artist Skrillex with the remaining members of The Doors and Pretty Lights with country legend Dr Ralph Stanley. The set up could be the conceit of a reality show to exploit the differences between generations but both the artists and filmmakers smartly recognize that this is not the goal here. Instead we see professionals getting honestly inspired by their collaborators. Taking on classical music, New York-based DJ Premier is especially fun to watch as he’s taught how to conduct the Berklee Symphony Orchestra. His piece stitches together rapper Nas with eleven classical works from Mozart to Brahms to wonderful effect.

The starriest of collaborations is the jazz work created by producer Mark Ronson in New Orleans with Erykah Badu, Mos Def, The Dap-Kings and Zigaboo Modeliste. In a piece themed to gumbo, Ronson perfectly captures the spirit of the project when he says “You mix it all up in a pot and see what works.” In an age where people walk around with entire musical libraries in their pockets, this sentiment is clearly already accepted by modern listeners. Using available technology to create actual seamless blends like these is the natural next step.

Adding to the talent on display is the fact that the doc is beautifully shot. You can feel the excitement of the working studio through Bar-Lev’s fly-on-the-wall footage. When the final products are eventually performed, the sense of accomplishment is palpable as Bar-Lev cuts between the isolated artists recording and the wild, entertained crowds. It’s remarkable to see concert goers open to artists they may never have encountered otherwise. One can only hope the DJs take the inspiration they found during this film and continue to work outside their comfort zones.