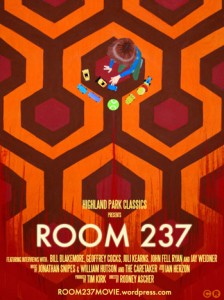 If a picture is indeed worth a thousand words, then a motion picture is worth at least a million interpretations. Rodney Ascher’s documentary “Room 237: Being an Inquiry into ‘The Shining’ in 9 Parts” puts Stanley Kubrick’s 1980 masterpiece of modern horror under the microscope to present us with a wide range of interpretations through the hearts and minds of five of the film’s most avid watchers.

Within the documentary’s opening minutes, it’s clear that the film is not aiming in any way to be a standard “making of” documentary but, rather, a detailed scholarly deconstruction of a piece of art. Luckily, “The Shining” is a rich enough movie to warrant such an in-depth analysis and “Room 237” succeeds in being thought-provoking and intriguing throughout its 98-minute running time.

The hypotheses and theories put forth in “Room 237” range from plausible to wildly overreaching. Sure, it’s quite possible that the theme of the genocide of the American Indians is part of “The Shining”, especially given that the film’s grandest character – the Overlook Hotel itself – is built atop an ancient Indian burial ground. It’s a plot point that Kubrick elected to carry over from Stephen King’s novel and it sets the stage for something wicked that will its way come. And while you probably noticed the Navajo-themed décor that is prevalent throughout the Overlook , you may not have registered the cans of Calumet baking powder that are strategically placed in certain kitchen-based scenes. Or Wendy telling Danny that the loser of the race to get through the hedge maze has to “keep Amerca clean.” Hmmm…

The other interpretations presented are equally compelling: that “The Shining” has allegorical roots in the Holocaust, that the hotel is a sexual predator that feeds off of the people that inhabit it, and that the film is Kubrick’s secret confession to his wife that he was involved with faking the footage of the NASA moon landing.

Ascher’s documentary takes its craziest turn when he allows Jay Weidner to present the idea that interlaced in “The Shining” are various clues that the visionary that was able to create “2001: A Space Odyssey” in 1968 was the prime mover in staging and filming the televised footage of the Apollo 11 moon walk in 1969. While it would be easy to dismiss his theory as being that of a conspiracy-theorist nut job, he nonetheless presents a wide array of fairly convincing “evidence” to support his claim.

“Room 237” is at its strongest and most engrossing when it illustrates – via film clips, diagrams, and even computer-animated 3D models of the Overlook Hotel’s floor plan – the theories that all of its commentators are presenting. It often borrows fairly heavily from the Errol Morris school of documentary film-making in that often employs reenactments and simple single inanimate objects taking up the entire screen.

The documentary repeatedly takes wrong turns when it uses clips of existing films – including some of Kubrick’s – and manipulates them to be relevant to “The Shining”. The very first shot in “Room 237” is actually a scene from “Eyes Wide Shut”, but instead of Tom Cruise looking at a jazz club poster advertising the Nick Nightingale quartet, he’s looking at the European poster for “The Shining”. While this digital fakery is mildly amusing, it sets the wrong tone for “Room 237”. It also seriously begs the question of what the late Kubrick would have thought about his work being altered in this way.

The film’s weakest link is its horrendous original music. In many instances, it’s so out of sync with the material that “Room 237” presents, it makes one wonder if the wrong score accidentally got mixed in to the film’s soundtrack. Even the involvement of Walking Dead composer, Bear McCreary, can’t save “Room 237”’s music from cheapening the documentary as a whole.

Fortunately, the subject at “Room 237”s core – “The Shining” itself – is impervious to the goofs that a documentary about it may have. As is stated in the film, “There’s a lot of stuff [in “The Shining”] that people haven’t seen yet, so they should keep watching it.” Indeed, after watching “Room 237”, a repeat viewing of Kubrick’s 1980 horror masterpiece is pretty much a necessity – although you’ll never look at the magazine that Jack Torrance is reading in the Overlook’s lobby the same way ever again.

Filed Under: Film Reviews Tagged With: 2001: A Space Odyssey, Bear McCreary, Being an Inquiry into The Shining in 9 Parts, Bill Blakemore, Geoffrey Cocks, Jay Weidner, ...