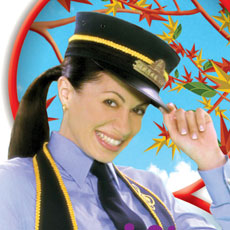 I have to admit, 9 months ago I did not know Genevieve Goings or the music of Choo Choo Soul.  But thanks to the birth of my daughter we discovered the wonderful thing known as Disney Junior, a 24 hour channel aimed at preschoolers. While watching this station, we heard the fun and exciting videos from Choo Choo Soul with Genevieve! These songs really captured the attention of my daughter from a very young age. Their take on the ABC’s brings a new and fun way to learning.  I have a feeling that as my daughter grows up these songs are going to be more and more helpful in learning. Choo Choo Soul recently released a new CD consisting of “Disney Favorites” with classics like “Hakuna Matata”, “Bare Necessities” and “When You Wish Upon A Star”, with a little extra soul added to them. I was lucky enough to be able to track down Genevieve in order to get the inside scoop on how Choo Choo Soul started and chat about the new album and their love of entertaining children.

Mike Gencarelli: Can you tell us about the birth of Choo Choo Soul and how you met Constantine “DC” Abramson?
Genevieve Goings: It is pretty crazy how things work out. DC and I were actually in a band together, which was this R&B/Soul sort of group. I was also doing a video game (“Toe Jam & Earl III”) voice over for a guy that has now become a good friend Greg Johnson, who also created the concept for Choo Choo Soul. We were doing this game and I was voicing these Gospel singers, except they weren’t singing they were just talking. I told Greg these characters should be singing their lines and getting down with some soul. So I ended up singing the lines and we had so much fun with that. He ended up writing like 10 pages of lines that had me singing and that sparked this little thing inside of him. He said he always had an idea for a children’s CD about trains [laughs]. So we did it and it ended up being “Choo Choo Soul”, our first 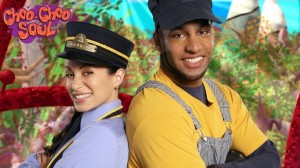 album. It was great and caught on like wildfire. It is actually good funky music for kids. Our tagline was “Music for kids that will not drive parents crazy”.

MG: How did you then get involved with Disney?
GG: It worked out great. Disney Channel got a hold of it and liked it. They flew me out for a meeting, which actually ended up being an audition. We didn’t know this at the time, all we got an address to meet them and it turned out to be a classroom. There were these people in suits, cameras and 30 kids on the floor sitting Indian style. They just said “Alright go!” [laughs], but it worked out. DC and I both love what we do and we have been doing it for eight years, which is crazy. But we are still going strong. 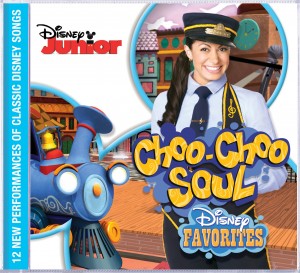 [laughs]. If they love it…then they LOVE IT with their whole entire soul! It is just really amazing. I like to say they don’t care who I am dating, what I weight or who I am wearing [laughs], you know? It a polyester suit [laughs]. They are just so pure and to be able to entertain them at that young age is great. With the magic of Disney behind us, which is the greatest children company, it gives us this platform to succeed. It is just so amazing.

MG: Tell us about your latest CD “Disney Favorites”?
GG: That was actually brought to us by Disney. It was their idea to work with Disney Junior channel, which is 24 hours of programming for that young preschool age. I think the big point for them was to really marry the classic Disney with the new era and I think that is what the whole channel is doing. So having their fun little Choo Choo crew translate these old classics to the younger generation is what they were going for with that.

MG: I like how you guys take these wonderful songs and put your little twist on them, especially with “Hakuna Matata”! I love it.
GG: Thank you. We love that. Disney Records wanted us to put together these as a full album since we only had filmed eight of these songs as videos. They said “Gosh, we need to fill up a whole CD with more songs”. So that was a great day for us. We definitely had a blast with that.

MG: What is your all-time favorite Disney classic song?
GG: Oh…Oh my gosh! I would have to say “When You Wish Upon a Star”. I can’t even believe I got to do that song. It is just amazing and very special. 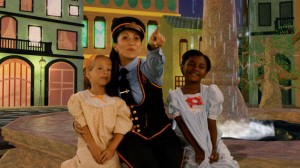 MG: Like you said you’ve been doing this for 8 years now, what has been your highlight?
GG: It is really the live interactions. DC and I are both live performers. Stage has always been our thing. So I think that ending up on television has been an added bonus for us, which of course is absolutely amazing. I mean getting to dress up like Cinderella and Prince Charming and dancing around was a great highlight [laughs]. The real peak for us though is live with actual kids, getting to meet and see them. Sometimes they come dressed as us, which is really fun. Plus we are using our actually names, it is not a character name. My name is really Genevieve. So when a parent tells their kids “There’s Genevieve” and I bend down to hug them…that is the best! I just am grateful to Disney since they really have embraced us. It is not like a lot of other kids music and I think that is why it is working.

MG: What in the cards next for Choo Choo Soul? Any touring?
GG: We are really hoping to come to the Disney parks but nothing is setup yet. We will be definitely touring this year. Disney will be posting our dates. We also have a Facebook page and we put up all of our stuff there and handle it personally. We love to keep in touch with our fans and see photos/videos. Right now we are working on getting feedback from our fans as which songs are their favorites. We are trying to build that into a tour which would be like a party-along and sing-along show. We are working on that for the Summer and Fall. So hopefully we will have some dates near everyone soon.