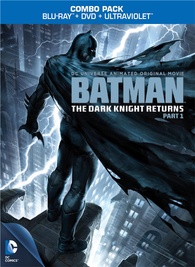 After Christopher Nolan’s fantastic trilogy, DC and Warner Premiere has decided to keep it dark and go with Frank Miller’s groundbreaking “Dark Knight Returns” arc.  The animated film itself is split into a two-part feature-length films.  They take a more violent and brutal look into our comic book anti-hero. “Batman: The Dark Knight Returns – Part 1” is one of the best films to come out of the DC Animated Universe. You forget that this film is only an animated film with how  epic this feels.  I wish that all of the DC Animated films took a page from this film.  I am not sure on Frank Miller feels on this but it feels like it literally jumps off his page on into your face!

Official Premise: It is ten years after an aging Batman has retired, and Gotham City has sunk deeper into decadence and lawlessness. Now, when his city needs him most, the Dark Knight returns in a blaze of glory. Joined by Carrie Kelly, a teenage female Robin, Batman takes to the streets to end the threat of the mutant gangs that have overrun the city. And after facing off against his two greatest enemies, the Joker and Two-Face, for the final time, Batman finds himself in mortal combat with his former ally, Superman, in a battle that only one of them will survive.

Warner Premiere has really delivered a beautiful Blu-ray combo pack including a Blu-ray + DVD + Ultraviolet Digital Copy. The 1080p looks beyond amazing and works perfectly with the mix of hand-drawn animation and CG effected for the film. DTS-HD Master Audio 5.1 works perfectly with the darkness that this film carries.  The action explodes off the screen and kicks you in the face.

The special features includes are good but not spectacular. “Her Name is Carrie… Her Role is Robin” ius a look at the role of a female Robin. “Batman and Me: A Devotion to Destiny, The Bob Kane Story” is a 2008 documentary that looks into the life of Batman creator. “Batman: The Dark Knight Returns, Part 2 Sneak Peek” is a behind the scenes look into the second part. “The Dark Knight Returns” Digital Comic is a very short 4-page preview of Miller’s Batman epic novel, I would have loved to see the complete comic converted.  Lastly there are two classic episodes of “Batman: The Animated Series Episodes”, “Two-Face, Parts 1 & 2”, which would have been amazing if it was in HD but it is not.