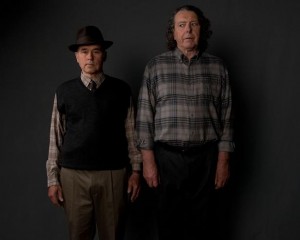 John Dunsworth & Richard Donat play brothers Dave Teagues & Vince Teagues in Syfy’s “Haven”. Vince is the artist and editor and Dave is photographer and editor of the Haven Herald…but there is much more to be told behind these two characters. Media Mikes had a chance to chat with John and Richard about season three and what we can expect.

Mike Gencarelli: What do you enjoy most about playing Vince Teagues on Syfy’s “Haven”?
Richard Donat: Vince, well I just love him since he is such a quirky guy. Partly because he has a lot of hidden aspects, which will hopefully be coming out as the show progresses.
John Dunsworth: Well I love working with Richard Donat. We have known each other for a while and we have done a bunch of great plays together. I was mostly a professional actor in the stage before “Haven” came around.  I love working in Nova Scotia.  Regardless of the part, the people that we work with are just a joy to be with on the set.

MG: The new season has really started to show some light behind what Vince and Dave really know; has that been fun to see that reveal?
RD: Oh yeah, it is great. Because of John, I feel that it really helps. We just have a great time together. We both live in Nova Scotia and I have known John for a long time.
JD: I would like to be more in the know. We confess sometimes that we don’t know what is going to happen and sometimes we are lying and then sometimes we really don’t know. It is hard to figure out when we are lying and telling the truth.

MG: Vince and Dave seem like they are disagreeing a bit more than usual, can we expect any rivalry this season?
RD: Well, we have been sort of at odds. But we always seem to get back together. In terms of the progress, I won’t able to say too much now but there is definitely a couple of things that happen.

MG:You two play great off each other; can you reflect on this collaboration?
JD: Well, I have to reflect on the writers. We don’t know what are story arc is. At the end of season three, which is my favorite season so far, we were throw some real curves. I thought I had it figured out…but it was the complete opposite. There are so many different possibilities.

MG: Most of the cast is from California, how does it feel to have the home turf advantage?
RD: Oh it is just fine. The whole cast is made up of some really great people. We all get along great. Thank God! When you work in those conditions, it is nice to be able to work well with people. There is no sort of LA thing, everyone is great.

MG: How does season three compare to you from the first two?
RD: Well, I think a lot more interesting things are happening between the characters. Then we get the introduction of Dwight is really fun story (played by Adam “Edge” Copeland”), who came in last season. It all starts to blend in. I think they seem to concentrate more on a centralized story line instead of individual episodes. I just can’t believe the reaction to the show.

MG: Do you find that you watch the show as it airs on TV?
JD: Last week, my wife and I finally watched season two. I don’t watch television or even get TV in our house. But I got the season as a present and I was blown away. I am so impressed with the three principals. On the set, the acting seems very subtle but it really comes across on the show. And Adam “Edge” (Copeland), he is just great.

MG: What would you say has been the highlight for you working on “Haven”?
RD: I think the highlight is actually getting to do the show. I have always lived here and then this show comes along and suddenly your life is changed. It is quite extraordinary really.
JD: Yep, the highlight is showing off Nova Scotia and living here. Right now, I can see the Grey Gull from my house. It takes me five minutes to get to the set some days. It has to be some kind of a blessing to be able to work in my own community on such a great project. I feel like I am the luckiest guy in the world.
RD: Yes, me too. I live about 45 minutes from the set and I am able to go home at night. So it is really great.

MG: John, how was it going from “Trailer Park Boys” to “Haven”; how does it compare for you?
JD: Last week, someone asked a person; “are a character actor of a lead actor?”. The right answer, of course, is a character actor. I like different roles. I like to play villains. So this has been nothing but a pleasure. We also just got the ratings in for the first episode of season three and I got a feeling that a fourth season is almost guaranteed! So I am on a very big high.