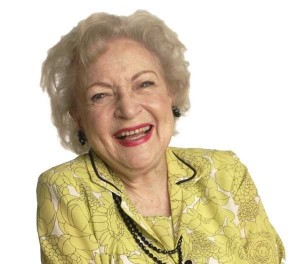 Betty White is a legendary TV icon, a seven time Emmy award winner and currently starring in NBC’s show “Betty White’s Off Their Rockers”. Betty and her posse of senior pranksters returned for season two of this series on NBC on Tuesday January 8th with special guests PSY and Kim Kardashian appearing in bits with Betty in two back-to-back episodes. Media Mikes had a chance to chat with Betty about her career and the new season

Mike Smith: You are a cultural icon. What keeps you going in the business?
Betty White: Because why quit something you’re enjoying so much? It’s such fun, and who would ever expect at 91 to still get invited to do shows. I mean, that’s unheard of, so if they don’t want me to do it, don’t ask me, because if they ask me I’ll take it.

MS: When you were first approached about doing this show, it’s “Off Their Rockers” with seniors doing pranks, did you immediately know you wanted to do it?
BW: No, I was not enthused about doing this. First of all, well not so much for the show but because my schedule just didn’t tolerate it, so I thanked them very much and said, no thank you. But they kept coming back, and it was a show that started in Belgium, and it was the most popular comedy show in Europe for a while. So when they invited me to do it, I said that’s very nice, but I just can’t work it in. And they kept coming back, and of course I had the backbone of a jellyfish, so here I am doing it, but I’m having a good time.

MS: What’s the best prank you’ve ever pulled, the funniest one?
BW: I’m not a real prankster. I love doing “Off Their Rockers”, because the other people are pranking, but I willmaybe kid my friends and say one thing or tell them something happened that didn’t really happen, but I straighten it out pretty fast. The trouble is you can paint yourself into a corner if you try too many pranks, you know? 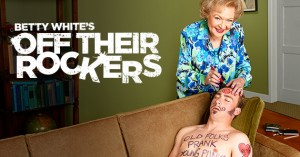 MS: Can you reflect about the direction of TV today?
BW: Well, I think TV has changed, but I think the audience has changed more than anything else. The audience has seen every plot. They’ve heard every joke. They keep being a challenge, so the producers and the show people try to top themselves or get unusual and I think every once in a while, just a good old-fashioned straightforward television show, or a situation comedy suddenly hits the spot. It’s almost like something they haven’t seen for a while.

MS: How did you develop the sense of humor that you have and the love of laughter, and your amazing sense of comic timing?
BW: Oh, that was my mother and father. I was an only child, and the – we had the best time together. My dad was a salesman, so he would bring jokes home, but also he’d ask me how things went at school, and I would start telling him, and pretty soon we’d begin to make jokes about it, and it was a love of laughter at home that just was a precious commodity to have with your folks, and Sunday morning breakfast would last two hours sometimes when we all giggled and scratched and talked.

MS: Could you elaborate a little bit on how you think you have achieved the notoriety that you have, and what advice you can give for other women that are starting in the business?
BW: Well, bless your heart, I hope it’s fame, not notoriety, but I’ve been so lucky. I just can’t tell you how lucky to get to this age. Who would ever dream that you’d get to be 91 years old and you’re still working as much as I am? But I think it’s because I thoroughly enjoy what I do. I love this business, and I’ll quit when they ask me to, but as long as they keep asking me to work, I’ll keep saying yes, and it is 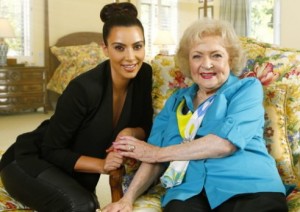 such a privilege. I think women have come a long way over the years in being you know, coming into their own and roles that they get and in – well, in the whole business, and women executives and all that, but it’s a very lovely position to be in to be taken seriously as well as laughed at.

MS: Can you talk about what it was like to have Ed Asner on the show, and what you did together?
BW: Oh, it was such fun, and Ed and I stay very close. We’ve always adored each other. I don’t think we’ve ever said a nice word to each other, but we adore each other. You know that kind of a friendship. He always yells at me and I yell at him and lovingly. He did the show and when you work that closely together, somehow you fall into a pattern, and it’s as though you saw each other yesterday, even if a little time has gone by.

MS: What are some of the biggest challenges in making the show?
BW: Yes, well, let me answer the question. The challenges are to try to keep it fresh, to try to keep any semblance of freshness going. Well, after this number of years of all the shows and all the jokes and all the scripts, that’s the – a major challenge, so what you do is keep reworking the same old material and try to put a little new slant on it, and then with fresh people in the role, it’s amazing how long you can milk stuff.

MS: What type of attitude do you recommend for longevity?
BW: Oh, honesty. You can fool everybody else maybe that you know, but you can’t fool that camera. That camera will know when you’re faking it every time.