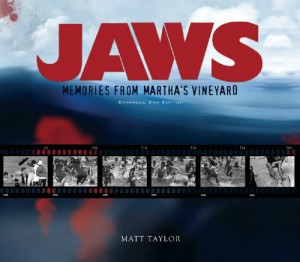 Are you a “Jaws” fan? Are you looking for a great coffee table book? Then look no further “Jaws: Memories from Martha’s Vineyard”, is the ultimate coffee table book. This book is no joke and is guaranteed to satisfy every fan of the film. This 312 page book, takes you into the making of “Jaws”, which was shot on Martha’s Vineyard in Summer/Fall of 1974. This has to be one of the best behind-the-scenes experiences that have been published in book form to date. I was aware of this book coming years before it was released and during its early conceptual stages. Since then it has really expanded well beyond what it was originally suppose to be and this expanded 2nd edition only makes this book even better. Be sure to check the “Thank You” section on the last page to see a few names from the Media Mikes family, as well!

Synopsis: The filming of the blockbuster film Jaws is regarded as a landmark event in both the history of motion pictures and the quaint New England island of Martha’s Vineyard, where the geographic isolation necessitated the hiring of hundreds of locals to work as actors and laborers. Among this virtual army of hometown participants were numerous professional and amateur photographers, each with full access to the production’s inner workings—for the first time ever this compiles their behind-the-scenes photographs and stories into a treasure trove of Jaws rarities. Included are a foreword by director Steven Spielberg, interviews with production designer Joe Alves, screenwriter Carl Gottlieb, location casting director Shari Rhodes, and more, providing an unprecedented all-access pass to the creation of some of the most memorable and terrifying scenes in film history. This unique compendium is the first to focus on the production’s local participants, telling their stories at last.

The first edition of this great book was originally released in October of 2011. Titan Books is behind re-releasing this expanded second edition and did a great job (as usual!). I have to say I was skeptical about the expansion but this is actually quite decent consisting of an additional 16 pages of newly uncovered family photos and excerpts from the community that participated in the making of Jaws whether they were extras, stage hands or just watching bystanders.   After the initial release for this book, I am surprised that their isn’t more of a push for this edition, especially since there is a bunch of new pages and Universal’s just released ” Jaws” on Blu-ray this summer.  As a killer “Jaws” fan myself, I have to say that this is must even if you have the first edition of “Jaws: Memories from Martha’s Vineyard”.  You will not regard your purchase for sure, I mean especially if you have more than one coffee table to fill.