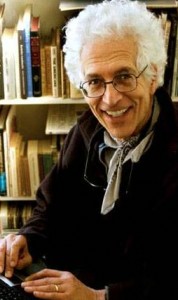 Alan Rinzler is known for working as consulting editor for the late Hunter S. Thompson on “Fear and Loathing on the Campaign Trail”, “The Great Shark Hunt” and “The Curse of Lono”. Alan has also worked with such respected authors such as Clive Cussler and Robert Ludlum, as well with memoirs for Frank Capra and John Lennon. Media Mikes had a chance to pick Alan’s brain to tell his experience with working with the late Hunter S. Thompson.

Mike Gencarelli:  “Fear and Loathing on the Campaign Trail” and “The Great Shark Hunt” are two of my favorite Hunter S. Thompson books.  How did you get involved with him?
Alan Rinzler: Back in 1965 or so, I published a book at the Macmillan Company by Danny Lyons called The Bike Riders which was a photo book about a group known as the Chicago Outlaws and I was very interested in reading another book about motorcycle gangs.  At that point I had never heard of Hunter Thompson but I got a copy of his first book Hell’s Angels and loved it. It wasn’t a big success at first, but eventually sold more copies over the years as Hunter became famous.  Then around 1969, I was the Vice President and Associate Editor of Rolling Stone and met Hunter. Hunter had decided to run for Sheriff in Aspen, Colorado, where he lived. He wrote a couple of pieces about his campaign and nearly won.  Then we published his classic Fear and Loathing in Las Vegas in two parts. In 1970 we started a Rolling Stone book company called Straight Arrow Books, of which I was President and Editor-in-Chief. We decided to cover the run-up in the primary campaign and 1972 presidential election. We were  competing with Theodore White’s “Making of the President” series that had started with JFK in 1960. White had written books covering the presidential campaigns of 1960, 64 and 68 and we knew he would be working on one for 1972.  So we assigned Hunter to the job.  Of course, 1972 was a very interesting campaign.

MG: Tell us about your experience working with him?
AR:  Hunter hated editors and ignored deadlines.  During the ten years he’d struggled to get a foothold as a writer, the editors at various magazines he submitted ideas and articles to either rejected his copy or tried to homogenize the style to fit what they thought was their audience. We loved the way he wrote but when you’re covering a presidential election you’re covering breaking news and have to be timely. After spending what was for us a lot of money to send him out with the other major league reporters covering the primary and election, we didn’t hear from him for weeks at a time. We weren’t getting any pages for the book and deadline for completing all the articles and weaving them into a book was getting closer.  We had gotten printers waiting and our distribution network was geared up so we could get out there before Theodore White. By November, Hunter was avoiding me and when I tried to find him sent me threatening letters, like “If you come anywhere near me, Rinzler, I’ll break every bone in your body”.  So I had to take drastic measures.

He was hiding out at the Seal Rock motel at the end of Geary Street out by the Pacific Ocean in San Francisco. I loaded up my car with a big Nagra tape recorder, dozens of grapefruits, which I knew he loved, and a few cases of Wild Turkey. Hunter resisted at first when I pounded on his door but eventually relented. He wanted to do a good job and knew he needed help.  We worked out a system where I interviewed him, we’d have a team of people driving out with the pages they’d transcribed so we could take me out of the narrative, edit, re-record, retranscribe and then start all over on the next chapter. I had my dog Pushkin with me, a big brown shaggy poodle who went crazy every time he heard the seals barking and jumped all over our papers and photographs we had spread on the bed and all over the room, spilling glasses, chewing up the towels. Made a terrible mess. After sixteen days of no sleep we polished up the final manuscript, ready for the presses. But that’s basically how we wrote that book and it turned out to be pretty darn good.  Fear and Loathing on the Campaign Trail is still in print, still being read as a model of gonzo campaign coverage and revered by smart journalism students. Not just because it’s funny, smart and original.  It is.  But Hunter also produced comprehensive meticulous analysis and evaluation of the primary process and the presidential election itself.

MG:  Do you still have the recording from your sessions?
AR:  I do.  I have all of the recordings.  I taped everything because that’s how we worked.  And I taped all of our phone calls too.  Then when I came back to Berkley I got in the movie business for a while.  I knew Jack Nicholson and Jack was a huge admirer of Hunter’s.  So we all met together in Hollywood at Jack’s house, out by the pool…Nicholson wanted to film an idea Hunter had for story called “Guts Ball or The Great Shark Hunt”. The studio wanted to do it.  Jack wanted to do it.  But it never happened. At this point, Hunter was deteriorating in both in his life and in his writing. He got worse instead of better on the addiction front.  His wife left him. Friends and a series of very willing girlfriends, none of them could keep him even reasonably straight.

MG:  How does he compare with the many other famous authors you have worked with?
AR:  It was ultimately a sad story.  At first I was pissed off at him.  And disappointed that, in my opinion, he was wasting  his talents.  Then we did one more really good book together “The Curse of Lono”. I left Rolling Stone and was working as Director of Trade Publishing at Bantam Books, so I could get him a big advance, the best motivation for Hunter, who was usually broke. To make sure we got the book done, I moved into his home, the Owl Farm near Woody Creek Colorado. He was snorting buckets of cocaine and drinking an awful lot, but I managed to tape, transcribe, gather up dozens of random scraps and ideas that I eventually, after a few months, gathered up in a big suitcase and took back on the plane while he was passed out in bed. The Curse of Lono was a little incoherent in spots but really the last brilliant thing he wrote, in my opinion.

He could have written another dozen books if he’d cut back and controlled his bad habits.  It was amazing he lived to 67 but by then he hadn’t written a good book in more than 25 years. A few months before he died he phoned me in the middle of the night. “Rinzler…Simon and Schuster has given me a lot of money and all I have is a bunch of junk. I need you to come out here tomorrow morning and get to work. Like the old days.” I asked him to send me the manuscript and he was right, it was awful. But before I could make it out there he had killed himself. Ironically, that very same draft came out without any editing and was on the NY Times Best-Seller list for eight weeks with the title “Kingdom of Fear”. Hunter’s fans want to read anything he’s written and don’t seem to notice that the book was awful. He’d be ashamed to know this, I bet.

Most of the author I’ve worked with keep getting better: Toni Morrison, Tom Robbins, Clive Cussler. The only other writer I think of in conjunction with Hunter, though an entirely different personality, was Jerzy Kosinski, who also killed himself.   He wrote “The Painted Bird.” One of Jerzy’s books was made into film Being There, in 1979 starring Peter Sellers and Shirley MacLaine, who was a very good writer. I did two very far out books with Shirley, Out on a Limb and Dancing the Light.

It’s very hard to be a writer.  It takes discipline, craft, courage and intelligence. Good writers struggle to balance their work with their personal lives – relationships, kids, money. I admire their bravery and devotion and have worked how for 50 years helping and supporting many authors who’ve produced long-lasting work that’s made a difference in their readers’ lives.