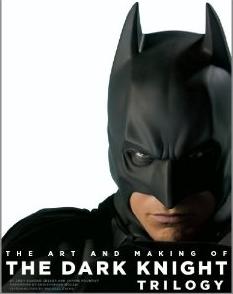 First things first, let me clear this up right off the bat (get the pun?). This book is labeled as a “Art of” book but really this leans a lot more in the “making of” aspect. It you look at it from that prospective then it works well. I would have love to see a full on “art of” book though. Director Christopher Nolan really did an amazing job of reviving the Batman franchise. Casting Christian Bale as the Caped Crusader was such an amazing choice, as he was perfect for the role. “Batman Begins” was a really sharp reboot of the franchise exploring the origins of billionaire Bruce Wayne to Batman. “The Dark Knight”, which is my personal favorite in the series, took the franchise to such a high level putting Batman against the Joker (plays by the late Heath Ledger). The final film of Nolan’s trilogy, “The Dark Knight Rises”, provided a very exciting and satisfying closing to this trilogy. Bane is one of my new favorite villains, played by Tom Hardy, who was out of this world. “The Art and Making of The Dark Knight Trilogy” focuses on the complete behind-the-scenes stories from each of these three epic films. Die-hard fans of The Dark Knight should know that this is a no-brainer.

There are eleven chapters included in the book.  The first focuses on “Screenplay”, the birth of the scripts and inspiration from the comics.  The second takes a look at the “Production Design”, which is key to this series.   It focuses on the sets, shooting locations and includes some nice concept art. Next up is “Cast”, which focuses on picking Christian Bale to play Bruce Wayne but look at all primary roles. Chapter four is titled, “Costumes & Makeup” and goes into details on Bat’s suit, the Joker’s makeup etc. The next three chapters are titled “The Shoot” and covers each of the film in the trilogy during production.  Special effects coordinator Chris Corbould takes the lead in the next chapter “Special Effects & Stunts “, covering the fight sequences and stunts from the three films. Next up, Lee Smith covers “Editing, Music, and Sound”, also includes quotes from composers Hans Zimmer and James Newton Howard. “Visual Effects” is a great chapter, especially since it was a critical part of the franchise.  This series used multiple different types of visual effects ranging from models and miniatures to CGI.  The last chapter focuses on the franchises “Marketing” and various aspects of promotion for these films. I mean can you ask for more? I think not.

Author Jody Duncan Jesser, editor of Cinefex magazine since 1992, really delivered a very intensive and thorough look into this franchise. She is no stranger to “making of” angle for Hollywood films having worked books for “Terminator 2”, “Jurassic Park”, and “Avatar”. She includes many in-depth interviews with Christopher Nolan and the films’ key cast and crew, including cowriters David S. Goyer and Jonathan Nolan, cinematographer Wally Pfister. There is much detail into the creative process behind the epic “Dark Knight” Trilogy, which is backed with (some) art and beautiful never-before-seen photography. The book runs over 300 pages and includes hundreds of photos, so it guaranteed to please any fan of the series. The book also includes a foreword by Christopher Nolan and an intro by Michael Caine. If that all isn’t enough there is also Nolan’s tribute originally published in Newsweek in 2008 about Heath Ledger, titled “Charisma as Natural as Gravity”. As good as this book does in covering each film, I also really enjoyed and highly recommend this book: “The Dark Knight Manual: Tools, Weapons, Vehicles and Documents from the Batcave”.