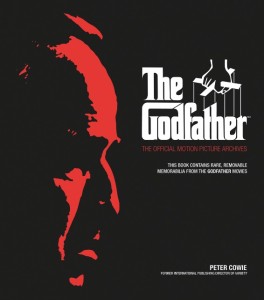 “The Godfather” is one of the most iconic franchises in the history of cinema. The American Film Institute ranked this masterpiece Number 2 of the “100 Greatest Movies of All Time.” 2012 is the 40th anniversary of the film. “The Godfather: The Official Motion Picture Archives” is a nice look behind-the- scenes to see what it was like to make one of the greatest movies of all time. I remember the first time that I saw “The Godfather” and the effect it had on me as a film buff.

This book contains rare, removable memorabilia from the “Godfather” movies.  Insight also released another similar making-of book this past summer with “The Dark Knight Manual”.  I love the idea of being able to read through a book like it is a scrapbook and not a technical manual. I only wish this book was longer than its scant 96 pages.  I would have liked to see this be a lot longer, especially since it is covering the span of the franchise through its three films.  Overall though fans of the franchise should dig these very creative and unique book.

This book contains many previously unseen behind-the-scene images from the Paramount Archives. I mentioned this book was like a scrapbook and the reason behind that is the 15 removable facsimile documents that were created for this including: a poster publicizing the original film, a special leaflet on the prosthetic teeth worn by Marlon Brando, continuity sheets and a page from Mario Puzo’s novel annotated during the writing of the screenplay.

“The Godfather: The Official Motion Picture Archives” is authored by Peter Cowie, who is a film historian who has written extensively on Francis Ford Coppola’s work. He is the author of over 30 books, including a biography of Francis Ford Coppola. Fans of the series are also going to really enjoy seeing the previously unpublished photos from the set and on-location filming capturing the look and feel of 1970s New York. There are also some really great rare stills from the film’s deleted scenes. If you can get over the length of the book, then you will find that this is definitely the definitive behind-the-scenes guide into the making of this wonderful film.