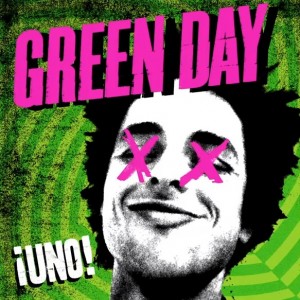 “Uno!” is the 9th and latest studio release from the East Bay punk/pop band Green Day. The album is also the first in a trilogy of albums by the band that will be released over the course of a few months. “Uno!” is being released via Reprise Records and features 12 new songs produced by Rob Cavallo (Alanis Morissette, Kid Rock) and Green Day.

Two parts “Dookie” and two parts “21st Century Breakdown” would be the best way to describe the latest release from Bay area rockers Green Day. The first in a series of albums titled “Uno!”, “Dos!” and “Tre!” the album features a much more scaled back sound very reminiscent of earlier Green Day albums. Gone are the themed rock-opera layouts which accompanied the bands previous two release and with the help of veteran producer Rob Cavallo the band sounds better than ever. From catchy radio friendly tunes like “Stay the Night” and “Sweet 16” to the edgier “Let Yourself Go” the band covers all the bases. I really enjoyed the album however I could have done without the song “Kill the DJ”. The composition of the song just doesn’t seem to fit in with the rest of the songs and did nothing more than disrupt the albums flow.

With “Uno!” yielding a number of great tracks I can’t wait to hear what will be included on the next two albums. Though I think the band is taking a bit of a risk doing 3 separate releases I wouldn’t expect anything less from a band with an album titled “Dookie” to their credit. “Uno!” does a great job showcasing the bands progression while still containing that classic Green Day sound and style.