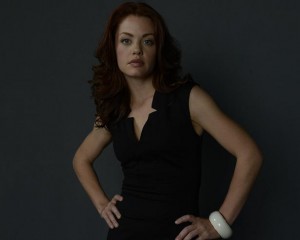 Bree Willamson played the role of Jessica Buchanan on “One Life to Life” for almost 10 years until it ended earlier this year.  She recently joined the cast of Syfy’s “Haven”, playing Dr. Claire Callahan.  Media Mikes had a chance to chat with Bree about the new show and also how it compares to working on Soaps.

Mike Gencarelli: Tell us how you got the role of Dr. Claire Callahan in “Haven” and your inspiration?
Bree Williamson: Well I auditioned like normal. It was just a really fun audition and felt that I really connected. On the soap, I got to play a crazy person and I guess I played her as the kind of therapist that I would want to have. She is smart, quick and tells it how it is. She doesn’t have a filter. She loves her job and is constantly working. She is someone that you can’t have dinner with because everything you say she would be analyzing it and doing her job.

MG: Was your hair color change for the film role, in particularly?
BW: Oh…it was because of the role. When I moved to L.A., I had darkened my hair to brown and for the role they wanted me red. So now it is back to brown/blond, so there ya go. Red hair was really hard to keep so they had to dye my hair like one a week, it was intense. This was one of the best crews I have ever worked with. They were amazing.

MG: Everyone character has their own secrets, what does skeleton’s does Dr. Claire has in her closet?
BW: She is straight forward and then she isn’t…that is all I am going to say [laughs]. This is a really fun show and I am really glad to be a part of it.

MG: How was it joining the show in its established third season?
BW: There really wasn’t any challenges. Everybody was great. My job was easy. Everyone was like business as usual and they had a routine. Working with a cast like Emily (Rose), Eric (Balafour) and Lucas (Bryant), they were all so nice. Working in Nova Scotia was great. Pretty much everyone in the cast is from L.A. and they all work hard and play hard. We would go surfing on the weekend and I got the low-down on all the best restaurants and best places to give your coffee.

MG: How do you feel this differs than your work on “One Life to Live”?
BW: With the Soaps, I was a little bit spoiled. It is a 9-5 job. You always know what to expect. We got to live in NY. You always give up something and get something else. With a Soap Opera, I did audition for other things but was mostly caught up with the Soap. Now not being on the Soap and doing other shows, it is exciting for me. I get to go to places like Nova Scotia. It is not as comfortable but that is the part that I enjoy the most. The hardest part was being apart from my home but at least my son got to come with me. My husband also got to come for a while.

MG: Tell us about your role in the NBC midseason series, “Infamous”?
BW: It is a great show with a really great cast. I play Vivian Bower, this high-class drug addict socialite, who gets murdered in the pilot episode. Meagan Good’s character Johanna she is a police officer, undercover into the Bowers household to solve the mystery of my death. It is a “Revenge” meets “Twin Peaks”. I get to come back in flashbacks so that is really great.