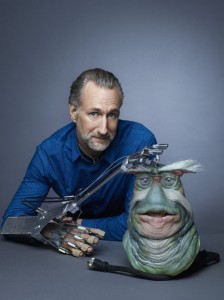 Brian Henson is the son of Jim Henson, creator of “The Muppets” and the current chairman of The Jim Henson Company. For years Brian has been working with his family in the company as a puppeteer in roles like Jack Pumpkinhead in “Return to Oz” and directing//producing “The Muppet Christmas Carol” and “Muppet Treasure Island”. He was also behind the TV series “Farscape” as the Executive Producer. His latest venture is in reality TV on Syfy with the series “Jim Henson’s Creature Shop Challenge”, which is similar to other Syfy shows like “Face/Off”. Media Mikes had a chance to chat with Brian about the TV show and also get the scoop on upcoming projects like “The Power of the Dark Crystal” and “Fraggle Rock: The Movie”.

Mike Gencarelli: How did the idea come about to do this show, Jim Henson’s Creature Shop Challenge?
Brian Henson: We were trying to think if there is a show that would make sense for The Jim Henson Company in the reality side of television programming. There aren’t many…because we are The Jim Henson Company. Almost everything we do has an element of fantasy or science-fiction in it. In many ways we are the opposite of reality. We make things that reflect on reality and allow you to objectively compare it to what we are presenting. But we decided that one area that is particularly exciting of our company is in the creature designing area. These artists, who are designing, conceiving and then building these creatures, really are like magic. They are extraordinary artists. We thought that doing a show around that aspect would be the most interesting area to the general audience. It is sort of like this secret world. There are no Academy Awards for creature designers. There are some creature designers who have won Academy Awards for costuming, make-up or special effects. Joe FREID, one of the Executive Producers, really shared the same enthusiasm in that area of our company and also has a strong background in reality TV programming. We went out to pitch it and Syfy loved it. We made it pretty close to the “Face/Off” format or even the “Project Runway” format. But what is different about it is that it is going into an area and a type of artist that is much different than anyone has ever seen. It is taking place in the Jim Henson’s Creature Shop and the prize really is a job with us. 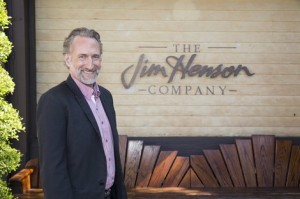 MG: How do you come up with the challenges for the show like the first episode’s undersea creature?
BH: We basically kept making lists of creatures that we thought would be interesting. For season one, we said that none of the creatures should be allowed to use any compositing, puppeteer removal or some of the techniques that we would normally use in television or feature films. So that closed us up a little bit and kept us focused for season one. Then we had about 15-20 good ideas on the board and we basically produced what we thought was a good wide range of creatures. One thing that is great about creature making, which perhaps is not true of some of the cousins to our TV show, is they are very different depending on what kind of creature you are looking for and what kind of screen test you presenting at the end of the episode. It means that every episode is able to stand alone and be unique from the one before it, which is a lot of fun. You should also expect the challenges to be more and more ambitious as we go forward, which I think is pretty great.

MG: What are you feelings on CGI versus practical effects like puppet work?
BH: My take on it reflects my background and where I come from and where my dad came from, we are a performance oriented company. So what excites me is performing creatures and puppets. We do some CGI but we call it digital puppetry. The way we do CGI, is that we real-time animate 3D creatures using performers. So if it comes from performance and creating a real moment for the characters then that is what excites me and our company. So in that sense, I prefer the animatronic creatures to the CGI creatures. But that is also due to my background. If someone comes from key frame animation, they may prefer CGI to stop-action animation. But I think there is wonderful space for every technique. There is clearly a sacrifice you make when you decide to go CGI with a creature is that you are not actually creating a real moment that 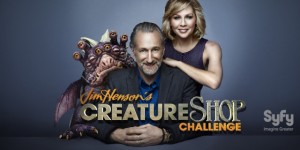 you then photograph. With most of our stuff besides the digital puppetry that we do, what you see has really been created and has been photographed and is now in the movie or TV show. It really happened and was really there. You can’t underestimate the value of that. It may mean that things are not quite as slick or accurate as CGI but it really happened and there is something really delicious and exciting about that. Certainly we have been seeing a big move towards CGI creatures but I think with films like “Where the Wild Things Are”, we are starting to see a movement back towards practical effects. But like I said there is definitely a space for both.

MG: I feel that this show actually brings this type of work back into the spotlight…
BH: Yeah, it’s been like a secret world. Nobody knows how these creatures are built and created. Nobody has done a show like this and it is really interesting watching them work.
MG: Yeah, one thing I would love to learn more about myself is the actual mechanics behind-the-scenes with these creatures.
BH: Well as you watch more of the series you will be more of that as well.

MG: Tell us about choosing your co-judges including Kurt Thatcher and Beth Hathaway?
BH: Initially we weren’t sure if we wanted to go with an all internal panel. Kurt is really an inside guy. Most of the work he has done in his career has been with our company. We wanted it to be as credible as possible because like I said the prize really is a job in the Jim Henson’s Creature Shop. Kurt is the type of person who would do 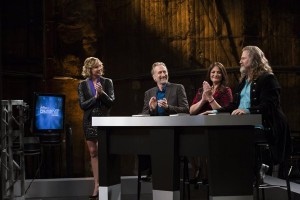 the hiring along with me who would also be making those judgment calls. At a certain point, we realized it was just too much Henson. So we reached out to Beth Hathaway, who is also a very experienced creature builder but her background is along the lines of Stan Winston and Rick Baker. It was actually really fun bringing her in since she is kind of an outsider but we just love her. It was good having her point of views and opinions on the judging panel.

MG: What do you see that the future has planned for this type of practical effects and for Jim Henson’s Creature Shop?
BH: I think there is a lot of opportunity for us to do more creature work. I think we are coming out of a time where the industry has been in a flux. I think people are now starting to stabilize and spend more money for cool fantasy/science-fiction characters. I think you will start to see more practical effects…but probably mixed in with some CGI, which is like what “Where the Wild Things Are” was. I think the best creatures yet to come are going to be a little bit of everything used to bring that creature to life.

MG: Do you have any update on The Power of Dark Crystal and Fraggle Rock movie?
BH: The truth is that it took me five years to get “Farscape” on the air. These things take time. Some of that time feels like you are just waiting around. There is a lot of things that need to come together in order to make these projects work. You need to have the right talent, financing and distribution partners. But I can tell you that these both in active development currently within our company. We are determined to get them made. It is big though and a lot of elements need to come together to get a movie made.