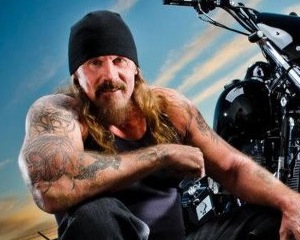 Rusty Coones is the guitarist and founding member of the band Attika 7. Media Mikes had a chance to talk with Rusty recently about the band’s formation and his upcoming appearance on season 5 of Sons of Anarchy.

Adam Lawton: Can you tell us what made you want to form the band?
Rusty Coones: It was not planned at all. In 1999 I caught a Federal case for conspiracy to distribute a listed chemical. But before all of that I had played guitar since I was around the age of 9 and took lessons into my teens where I learned to read and write music. I had songs structures in my head and even though I wasn’t playing in bands I still loved music. When I went into prison I spent a lot of time in solitary confinement. When you’re inside you spend a lot of time getting in your own head. The first few years I was in there I read a lot of books and wrote a lot for my website freerusty.com. I had a lot of follows worldwide and though it’s not currently active the site is still up. I was in the metropolitan detention center in Los Angeles about 2 years before I received my sentence. I was then sent to a prison Oregon. While there I was working out with weights 5 days a week. Right by where the weights were was a music room. If you signed up for that program you had to actively participate with a group. I would walk past that room everyday and I just became really inspired. I ended up going in and began playing with a band that was already there. They played mostly blues, rock. The first day I was there I asked if I could bring in a song I had written. They were very receptive to that. We got to go in that room twice a week and each time I would bring new songs. Most of the songs at that time had that blues, rock sound. A couple months later there was a riot in the yard resulting in a bunch of us being sent to other prisons. I ended up at a prison in Texas. When you’re shipped to a new place you have to spend a certain amount of time in confinement before you can go in to the yard. 3 days after being released in to the yard I was playing a concert in front of 1,800 inmates. It was all songs I had written. That material was all blues, rock. During this time I started experimenting with drop tunings. When you’re playing in that dropped key there are some real sweet spots on the fret board. I wrote 32 songs while I was there. I still have all of my notes. When I got out it was my goal to assemble the best band of musicians I could to start a band with. There have been a few different lineups of the band since I started. Evan Seinfeld and I joined up about a year ago when I was looking for a fill in singer. Evan became hooked on the songs and he and I started working together. We re-worked some songs and wrote new material which is what makes up “Blood of my Enemies”. 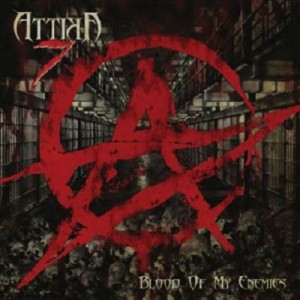 AL: What was your song writing process like being allowed only limited resources for short periods of time?
RC: 90% of the songs that I write the riffs and music are done first. From there is usually when I start on the lyrics. As soon as they let me out in to the yard I would go grab a little box guitar and start working on my riffs. Once I got them dialed in and they were in my head I would go back to my cell and write line by line the verses, choruses and such. Every song that I wrote was never given a title. The songs named themselves by the time they were done. The first few lines of a song are always the most difficult for me. Once I have those, stuff just starts flowing.

AL: I assume a lot of the material was written about the situations you were encountering each day?
RC: Some of the songs for instance “Serial Killer” was written in the words of a serial killer. I of course am not a serial killer. I was in my cell and went really deep in to my imagination so I could get to a dark enough place to allow me to write like that. It was kind of like when an actor gets in to character before performing a role. I was around a few people in prison that were possessed pretty heavy so it wasn’t too hard to come up with this type of material. Some of the other songs are about being on the inside and what you have to do to adapt.

AL: How have the recent lineup changes helped the band progress?
RC: The band is a little different now. Tony Campos is a great bassist as is Scott our new bassist. Scott has more of a Geezer Butler from Black Sabbath style where Tony is a serious metal player that is very precise. I think that with the way the songs are now Scott learned to play the songs the way Tony played them. Scott didn’t get to put a lot of his flavor in yet but, I can see this is going to be a lot of fun. Scott loves to run around and play riffs. I love that type of feeling. Scotts playing is bringing a really cool flavor to the band. We want this band to be timeless and we aren’t trying to be trendy. Evan is melodic in his approach which I think only adds to that timeless feel we are looking for. We are not trying to sound like anyone or anything else. Whether that’s good or not that’s the way things ended up. These songs were written in a vacuum. At the time I didn’t have any music to listen to. I just had to draw from what was in my head. I had all these little pieces floating around of things I liked. I developed my own style from that.

AL: Can you tell us anything about your upcoming appearance on “Sons of Anarchy?
RC: I have already shot 2 episodes and in the coming weeks I will be shooting some more. I am really excited to be a part of the show. I play a character by the name of Quinn who is the president of the Nomads motorcycle club. There have been talks of this character since season 1 but this will be the first time he comes out of the shadows. It’s going to be really interesting.

AL: How did you first get involved with the show?
RC: Kurt Sutter is a very smart guy. When he started the show he really immersed himself in the outlaw biker culture. He learned everything he could learn. When he was looking to learn he wanted to learn from the best so he came to us. (Coones is the founder of the Orange County Chapter of the Hells Angels.)Kurt’s research paid off and he has a lot of really good people around him. The show is a dramatic television show. There has to be some dramatic elements to keep people watching. If anyone tuning in is saying certain things are “bullshit” it’s TV! It’s supposed to be entertaining. You don’t turn on the television to watch actual everyday realism. Yes the show has some realistic elements but there’s entertainment factors combined into that. I am honored to be a part of the show.

AL: Were there any aspects of the shoots so far that have been difficult?
RC: This show has been the most professional production that I have ever been a part of. There are stunt people and fight choreographers that cross every t and dot every i. Everything is very organized. Things like the fighting and such were second nature. (Laughs)

AL: What other projects do you have in the works?
RC: Attika 7 is waiting for the last few things to be completed for our U.S tour. The band is also doing a West Coast tour that will be announced in the near future. I have some television things in works as well however I can’t really say anything just yet about that. Things should be quite interesting.