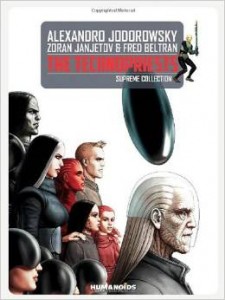 Over the last few months, I have been exposed to new world that consists of comics of Alexandro Jodorowsky. This includes his epic titles like “The Metabarons” and “The Incal”. This latest one, “The Technopriests” is yet another epic ride. This “Supreme Collection” consists of an eight-issue comic book limited series. It available in its entirety and in its original format. Humanoids has been releasing these not only cool but actually amazing hardcover collections of his work over the last few years and I simply cannot get enough of it.

Originally released from 1998 to 2006, this series follows five really interesting and strong characters. We have Albino, who is the main focus of the story and the future Supreme Technopriest. There is Tinigrifi, who is Albino’s lifelong friend. Panepha is the former priestess and mother of Albino and also his older brother Almagro and younger sister Onyx.  There are three different stories intertwined together in “The Technopriests”. The first follows Albino leading 500,000 other young technopriests as they try and find the promised galaxy.  The second plot follows his rise to become the Supreme Technopriest and the third follows his family during that same time period.

I loved the look and style of this comic. It was illustrated by Zoran Janjetov, who also worked with  Jodorowsky on “Before Incal” as well. Speaking of “Before Incal”, that was just re-released by Humanoids as well along with “The Final Incal” as well. If you have never read an Jodorowsky comic, then you are really in for a real treat. When you experience a  Jodorowsky comic, you mind is expanded and you are not able to go back to just reading regular comic book.  What I realized with reading Jodorowsky in the last few months is that his work really requires you to engage yourself in these comics and not just flip and look at the pretty pictures. I love that about this work. I can’t wait to see what Humanoids has planned next.