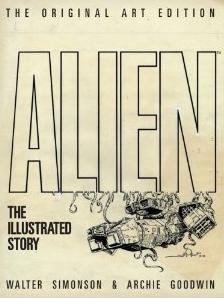 When I first heard that “Alien – The Illustrated Story” was being released by Titan Books, I was sure excited because I am both a fan of Ridley Scott’s film “Alien” and also comic book artist Walt Simonson. But I got much more than I expected (in a good way). This good in the words of Buddy the Elf is “GINORMOUS”. But that is the charm of it I think, it clocks in at 13.8″ x 1 x 19.9″. If you can’t imagine it…just take my word its oversized. Though there is a reason for it, since it is scanned directly from Walt’s original art and reproduced at the same size. Since the pages are in fact scanned from the originals they even include all the corrections, paste-ups and even coffee stains. I was blown away that they would release this and very impressed.

But wait there is more. The story itself is only 64 pages. Also included is Archie Goodwin’s original script for the story, as well as Walt’s two page try-out for Fox (which actually featuring a very different alien). There is a great interview with Walt and letterer John Workman and closing with an afterword by Walt. If you don’t want the GIANT hardcover edition, then you can opt out for the totally not as cool softcover “Facsimile Cover Regular Edition”, which is also in color. I highly recommend this “Original Art Edition” it is an amazing companion piece to this movie book.

The book was written by the late Archie Goodwin, the comic book writer, known best for his Warren and Marvel Comics work. He was also the chief writer and editor of landmark horror anthology titles Creepy and Eerie. On a graphic novel, the illustrator is really the star of the show. Walt Simonson is the man behind this one and he has written, penciled or inked Batman, Fantastic Four, The Hulk and Superman just to name but a few!

This book has been out of print for over thirty years, so this brand new edition timed perfectly with “Prometheus”, is a welcomed treat. It has been very carefully restored from original artwork in Walt Simonson’s studio and is presented here for the very first time in this definitive artist’s edition of the greatest sci-fi horror ever produced. So if you are a fan of “Alien”, sci-fi or event art…then this is a the book for you. Just make sure you have a very large coffee table – very large – because you will need it.