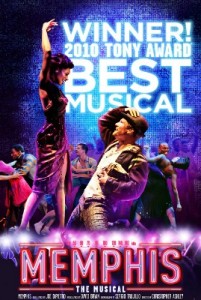 The time – the turbulent 1950s. The place – Memphis, Tennessee. Alabama born W.C. Handy, the father of the blues, wrote his first song here. Mississippi’s Elvis Presley, the king of rock and roll, died here. In between those two the musical heritage of the city grew, exploding into a new sound. That sound is captured in the Tony Award winning Best Musical, “Memphis.”

The show opens in a non-descript club, one that clearly caters to a strictly black clientele. The joint is jumpin’ until a new visitor walks in. A white visitor. This is Huey (Brian Fenkart). Huey loves the music he’s heard from outside the club and wants to experience it in person. It seems to sing to him. As he refers to it in the show’s first big number, he’s listening to “The Music of My Soul.” While there he meets a Felicia (Felicia Boswell), a featured singer in the club, which is owned by her brother, Delray (Quentin Earl Darrington). It’s obvious that there is an initial spark between Huey and Felicia, but to pursue such a romance in 1950s Memphis could have tragic consequences.

One day, while working his day job at a local department store, Huey is put to work in the stores record department. Tired of listening to Perry Como all day he puts on something a little more lively. The store starts hopping and record sales boom. However, when the manager learns that Huey has been playing “race music,” he fires him. Huey enjoyed his brief time selling records and begins applying for D.J. jobs around town. He comes across a local station whose weekly “Blues” show includes songs by Patti Page and Roy Rogers! When the D.J. vacates the booth for a moment Huey sneaks in and takes over. Next thing you know….HOCKADOO!….the city of Memphis begins to groove.

Packed with songs you’ll leave the theatre humming, “Memphis” is that rare 21st Century musical that wasn’t based on a film (“Spamalot,” “The Producers”) or full of familiar songs (“Jersey Boys”). The songs, by Joe DiPietro and David Bryan, are well written and, unlike some musical numbers, quite memorable. DiPietro had written the book for the musical “All Shook Up,” so he certainly has a knowledge of the early days of popular music. Bryan was once studying medicine at Rutgers when a friend of his called and asked him to join his band. That friend was Jon Bon Jovi, and Bryan has been the group’s keyboard player since day one, so he certainly has a knowledge of current popular music. And that is what “Memphis” is, a blending of various types of music into, as Dick Clark would say, “something you can dance to.”

The cast is first rate. Both Fenkart and Boswell were involved in the original Broadway production and their talents are more than evident. Fenkart gives Huey an almost child-like quality. He can’t seem to comprehend that what he’s trying to do is wrong. He loves music. All music. And he wants to share his love with anyone within listening distance. Boswell has a voice that would knock you down in the back row of the theater. Her solo number, “Colored Woman,” is one of the show’s highlights, as are her duets with Huey. The entire company was in fine voice, often causing those in the audience to rise to their feet and dance along, the sure sign of a great musical.

For more tour dates and information on the show, go to www.memphisthemusical.com