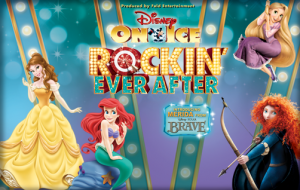 I have been attending Disney on Ice events for about 30 years now and I still enjoy them every time. Now having a daughter of my own (only 3 months old though), I am looking forward to introducing her to this event next year, hopefully just like my parents did for me. “Disney On Ice Presents Rockin’ Ever After” was the perfect event for any little girl…oops sorry, I mean Princess. There were many little princesses all around the Amway Center, I just couldn’t help but thinking about my daughter in those costumes. This event honestly though has been my favorite in many years.  There was something about it that just really engaged the audience, yes even the adults too!  The songs are just amazing and timeless. I can’t wait to see what they do next with Disney on Ice. I am not sure how they will top this one though?!!

The basis story for the show features Mickey, Minnie, Donald and Goofy introducing different talent as they “compete” to be the next superstar.  The princesses that take the spotlight in this show are Ariel, Rapunzel, Belle, and Merida from Disney•Pixar’s BRAVE in her ice debut!.  Like I said this show was amped up from last year.  There was something about the costumes that just really stood out and shined.  I really enjoyed the re-imagination of the characters wardrobe, especially for “The Little Mermaid” section. While on “Little Mermaid”, it stood out from the others being the only part of the show that used non-Disney music.  They had a nice blend of 80’s music including Madonna, with the classic songs.  “The Little Mermaid” also really stood out for its great use of black light on the environment and its skaters.

I am a huge Rapunzel fan personally, I feel that they did the “Tangled” portion up really well.  I thought the way they changed up the “The Ugly Duckling” scene into a dream sequence was very clever.  I also really enjoyed the way the lantern scene was presented. Merida from Disney•Pixar’s BRAVE was up next after the intermission in her ice debut!  They did a good job of working this section into a story being told by Mickey to his friends.  This way they were able to tell the story and leave out the witch and the bear aspects of the film.  It really flowed well.  Lastly, what better way to end then with “Beauty and the Beast”, one of my favorite films of all time.  This story is timeless and always warms your heart.  I should note it is also the only one out of the four that included the final showdown between good and evil, or Beast and Gaston in this case.  Of course then as usual Mickey and his friends closed the show and what an ending it was.  I had a hard time getting up, hoping that there would be more.  Oh well, have to wait till next year.

If you are interested in catching this great event while it visits the Amway Center in Orlando FL from September 7th-9th, 2012.  Click here for tickets and more details.

Here are a few pics that we were able to snap throughout the show, hope you enjoy!