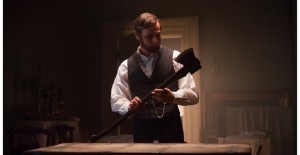 History tells us that Abraham Lincoln was a great man. What it doesn’t tell us is that, long before he became President he had a little side job. Seems the old rail splitter put that handiness with an axe to good use and killed him some vampires! No, really.

While living with his parents in Indiana young Abe Lincoln (Lux-Haney Jardine) intervenes when a young black friend of his is being beaten. Abe gets a taste of the lash as well for interfering. After his father has words with the man with the whip, he is fired from his job. Later that night young Abe observes an odd sight but dismisses it. When he wakes up he learns that his mother has taken ill. She later dies and Abe realizes what he saw wasn’t imagined. He swears revenge on the man he holds responsible for his mother’s death but, after shooting him in the face is shocked to see the man keep coming at him. Something funny is going on here.

Told with a brilliant 3D canvas, “Abraham Lincoln: Vampire Hunter” is one of the most original ideas to ever hit the big screen. What makes the film so good is that it takes its story seriously. This is not a spoof or a comedy. It’s history. When Abe (Walker) learns that his intended victim is a vampire, he enlists the aid of Henry Sturgess (Cooper), a vampire killer who hides secrets of his own. Henry tells Abe that he will help him learn to destroy the undead and begins a training regiment right out of “The Matrix.” Along the way, Abe meets Mary Todd (Mary Elizabeth Winstead) who is currently dating Stephen Douglas (an unbilled Alan Tudyk – Pirate Steve from “Dodgeball”). True love blooms and Abe confesses his deeds. However, Mary thinks he’s pulling her leg and dismisses him. Of course, Abe eventually gets his law degree, runs for elected office and embarks on his journey to the White House. And that is where we find him when he learns of a planned vampire takeover of the United States. Not on his watch!

Thanks to a smart screenplay by Seth-Grahame Smith, who also wrote the original novel, the film never disappoints. If you allow yourself to get lost in the story you soon begin to believe that what you’re seeing on screen may have happened. Along with vampires Smith has peppered the film with other historical figures who play roles in the story, including Harriet Tubman and Jefferson Davis. Another plus is that the actors are truly immersed in their performances. No sly wink of the eye to the audience. Walker bears a strong resemblance to Liam Neeson who, ironically, was director Steven Spielberg’s initial choice to play the 16th President in his upcoming bio-flick (since replaced by Daniel-Day Lewis). As played by Walker, Abe is a 19th Century Bruce Wayne or Clark Kent, his mild demeanor a mask for a man of strength. Director Bekmambetov, who helmed not only the vampire flicks “Day Watch” and “Night Watch” but “Wanted,” gets to exhibit his skills as an action director. A scene where Abe fights a gang of vampires while jumping back and forth off of moving horses during a stampede is mind blowing, aided in a great way by the brilliant use of 3D. This is what 3D was made for! Couple the process with the outstanding cinematography of multiple Oscar nominee Caleb Deschanel (father of Zooey and Emily) and you’re on the edge of your seat. To be fair I should also note that, when the action stops, the film slows down noticeably. Towards the end it’s almost like a roller coaster, with occasional stops accompanying one hell of a ride. There is also a major continuity error at the beginning of the film that really bothered me. If you spot it please let me know.