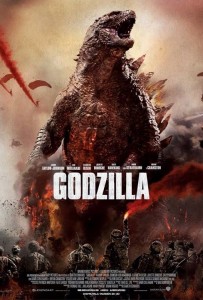 In October 2010, I was pushing a very small film called “Monsters”. It was directed by first-time director Gareth Edwards, click here is our interview with him. I had a feeling after watching this film that this guy was going to be HUGE! I just knew it. Well, “Monsters” did quite well worldwide at the box office and even spawned a sequel “Monsters: Dark Continent”, due out later this year. Most importantly what it did though was bring this director into the spotlight. Only a few months later, in January 2011, word was released that Gareth will be rebooting the “Godzilla” franchise. So I couldn’t be happier for this guy and in case you are wonderful, he knocked it out of the park with “Godzilla”. I usually hate going into a film with high expectations but it was impossible for me not to with “Godzilla”. It was easily my most anticipated film of the year, no question. There were moments in the film where I completely forgot to breathe and had my eyes tearing since I was neglecting to blink due to fear of missing anything. Gareth Edwards finally gets “Godzilla” right! A must see this summer!

One thing I loved about this movie was that you could tell that Edwards is truly a fan of the “Godzilla”  franchise. You can just tell that he wanted to make sure to get everything right for the fans. Personally, I have been actively avoiding spoilers and images from the film before seeing it in order to be completely surprised. Let me tell you that Godzilla looks absolutely amazing…and also extremely terrifying. He left me with chills for quite a while after his first body shot. Even though Edwards didn’t do the visual effects like he did on “Monsters”, I can tell that he still has his mark on it here because it really leads you on and then when you just expect it, it does a full reveal and leaves you screaming in your chair. The first time that we get a full view of Godzilla, I think half the theater was clapping and the other half was speechless while shitting their pants (I was the latter). I love the design the character, it is so sharp and captures the essence of the character well. Sure, it isn’t a man in a rubber suit, we all know how classic that look is but this is the NEW Godzilla and he has never looked better. Everything was done absolutely perfect down from his roar to his trademark atomic breath. Yes, the atomic breath…holy cow, I literally almost got up and cheered in my seat.

The story starts off in 1999 in the Philippines, where two scientists (Ken Watanabe and Sally Hawkins) find an uncovered tomb containing a fossil of a very large creature with two preserved pods…though one was broken opened and whatever was there was now missing. We then head to Japan where we meet Joe Brody (Bryan Cranston), a nuclear physicist/engineer and his wife Sandra (Juliette Binoche), a nuclear regulations consultant at the Janjira nuclear plant. As they are investigating an emergency at the plant, whatever was awoken from its sleep in the Philippines made its way to their plant to feed off the nuclear energy leading to the destruction of the plant. Though no proof was every gathered of the creature, the city was quickly evacuated and we flash forward 15 years to the present where Joe is still on the hunt for answers and calls to his son for help, Ford Brody, who is fresh out of the military. He also happens to be a explosive ordnance disposal technician (as you can imagine that becomes important later). As we find that the MUTO creature is looking for its spouse to reproduce, enter Godzilla who (like always never explained why) comes in to save us against these giant monsters. An all out battle is waged that spans from Japan to Hawaii to Las Vegas and California.

The film is nicely paced and runs just over two hours. In fact, Godzilla doesn’t make a full appearance until around the one hour mark but from that point on it is shear madness and shit gets very real. I would have liked to seen more of him, of course, but I feel that it was well calculated and like “Jaws”, it is what you don’t see that is more exciting. Godzilla’s nemesis’ in the film, aka MUTOs, which is short for “Massive Unidentified Terrestrial Organism” are pretty damn bad-ass and look just as stunning as Godzilla does. Speaking of stunning the film doesn’t just look outstanding it also sounds amazing and is lead so well by Alexandre Desplat’s score. If you see this film, I cannot recommend any higher to see it in IMAX 3D. I literally had my entire body shaking from the intense bass that dished out in the theater. The 3D effects are not overly noticeable, but that doesn’t mean they aren’t amazing. They are just well planned and add some amazing depth, especially to the battle scenes. Whether you are a hardcore Godzilla fan or have never seen a single film, this film can be enjoyed by anyone as it is a great blend of action/disaster/kaiju  film. After the very small budgeted “Monsters”, I am sure we were all concerned if director Gareth Edwards could handle such a large blockbuster but he really blew me away with this film. I urge you do not miss this film in theaters! It is quite the experience.