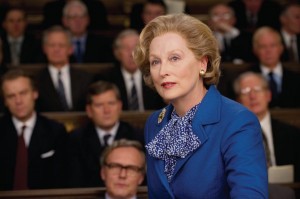 November 2008. As the daily papers highlight the recent terrorist bombings in Turkey a kindly old lady is sitting down to breakfast with her husband. Over their eggs she complains about the price of milk. A knock on the door alerts her to a busy day of book signings. Such is a day in the life of Margaret Thatcher.

Skillfully portrayed by Meryl Streep, on her way to Academy Award nomination number 17, “The Iron Lady” is a look at the decisions Thatcher made that took her from a little respected member of Parliament to one of the most famous leaders of the 20th Century. The story is told in two parts. The flashback sequences show how Thatcher, played by Alexandra Roach in these scenes, went off to Oxford, became a barrister and began her fight for the people of England. The modern day scenes are curious because though we see Thatcher speaking constantly with her husband, Dennis (Broadbent), she is only doing so in her mind. Dennis Thatcher passed away in 2003.

Director Lloyd, who directed Streep previously in “Mama Mia!,” stages these intimate scenes between Margaret and Dennis well. But she relies too much on dramatic music and heavy dialogue to establish Margaret Thatcher’s toughness. After Argentina invades the Falkland Islands it is her decision to go to war. The music builds as she is told one of the Argentine ships that attacked is steaming away. “Sink it,” she spits out to her naval commander. But even these detractions can’t take away from the masterful performance Streep delivers. Of course, she’s been delivering them for more than three decades so I don’t understand why I seem surprised.

The supporting cast is also first rate. As Dennis Thatcher, Broadbent brightens each scene he’s in. Ms. Roach also shines as the young Margaret as does Grant who plays Michael Heseltine, who challenged Thatcher’s leadership of the Conservative Party, which later led to her resignation.