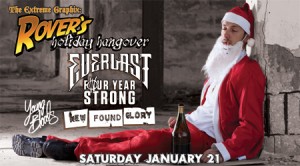 January 21st saw the arrival of Rover’s Holiday Hangover featuring Everlast and New Found Glory. The concert was put on by 94.1 The Zone which is one of Rochester NY’s most listened to stations. Like most radio sponsored events the musical line up was somewhat diverse and at times questionable in my opinion however each band put on solid performances for the near capacity crowd.

The Webster, NY based band Falling Forward kicked off the show playing their own blend of melodic infused metal which received a favorable welcome from those who showed up early for the show. Velvet Elvis followed and performed a drawn out set of what I would describe as sludge rock. The band had a couple moments where I 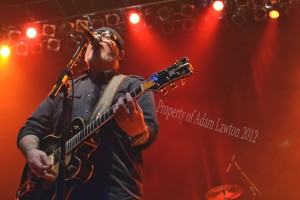 questioned if they were at the level to play on such a bill. Clearly stopping their drummer to restart songs is not a plus in my book. The crowd responded to the band with a somewhat lack luster applaud as the band left the stage almost 40 minutes later. Home town favorites Young Bloods took to the stage next and worked the packed hall back into a frenzy that was complete with dozens of flying glowing sticks which were given out by the band prior to the start of their set.

Next to take the stage was thought to be Four Year Strong however due to an illness in the band only two members were able to perform. Prior to the start of their set it was announced that this would be the first time ever that people were going to hear some of their songs performed acoustically. The crowd seemed very thankful that even though the entire band was not present they still cared enough to come out and put on a stellar performance that sounded amazing.

Pop Punk heavy weights New Found Glory followed after a brief intermission and preceded to ignite the crowd into one mosh pit fueled, crowd surfing hodgepodge that had security working overtime. The band played hit after hit along with treating the crowd to a couple classic covers songs by Green Day 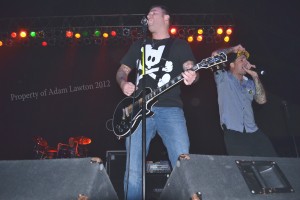 and The Ramones. Everlast would close out the show playing his own blend of blues infused hip-hop. A quick survey of the crowd made me question the playing order of the night as I noticed quite a few people myself included heading for the doors after only three songs.

Overall Rover’s Holiday Hangover was a decent show. It would have been nice to have a more cohesive line up as I felt it may have held listeners attention better and not made them want to leave early. For a presale price of $10.00 and a door price of $20.00 you really could not complain especially in this day and age. 94.1 The Zone did a great job giving back to their listeners and I am looking forward to attending more of their shows.