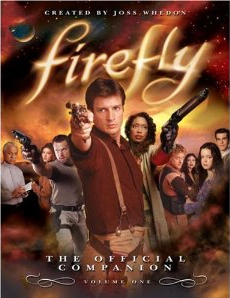 I have been a fan of the “Firefly” show since it originally briefly aired on Fox back in 2002. So you can imagine that the fact that they have an official companion to one of my favorites shows must be a thrill. Well the book definitely satisfies my “Firefly” lust. The book is jam packed with exclusive interviews with Joss Whedon, cast, writers and crewmembers. This book is definitely perfect for the mega fans aka the ‘Browncoats’.

There are full, uncut shooting scripts for the following episodes “Serenity”, “The Train Job”, “Bushwacked”, “Shindig”, “Safe” and “Our Mrs. Reynolds”. Each shooting script is backed with comments from both the cast and crews. This is something that is priceless if you are a fan of this series. Normally you would think…just shooting scripts? But this book takes that and builds on it to cater to the fans and deliver a great tribute to a great show.

There are many rare and previously unpublished photos from the show, as well as many great behind-the-scenes images. Also showcased in the book is the amazing production art from the show. One of the great parts of the series are their original props and costumes and this book has photos of both of them which have been shot specifically for this book. Fans of the show should definitely purchase this book if you don’t own it already.